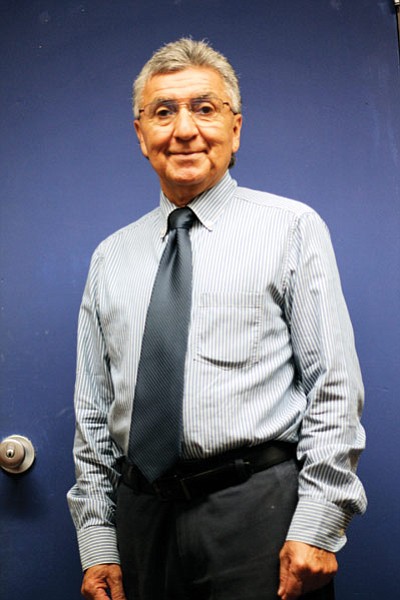 GRAND CANYON, Ariz. - On Aug. 17 when student's head back to class, parents will notice a few changes at Grand Canyon School (GCS), including new administration, six new teachers, new school curriculum and an athletics program ready to jump into a new season.

New school principal Javier Abrego is a familiar face at GCS. During the 2014-2015 school year Abrego served as athletic director and assistant principal. This is his second year working at the school.

While Abrego may be fairly new to the school, he is not new to school administration. With more than 40 years of experience to build on, he is ready for the upcoming year. One of his goals is to raise the schools ratings and help GCS become a top performer in the state.

"I'm very fortunate to be here," Abrego said. "Our goal is to be an A school, an A district and really to be the top district in Arizona."

Abrego plans to help the school achieve this by implementing the Beyond Textbook curriculum, building a strong staff and getting professional educational consulting. Abrego said students and parents can expect several new and/or revised after school programs and clubs.

"We have a new Fit Kids instructor - (to help) keep the kids active," he said. "We also have a very big archery club that we started last year and put on hold because we had too many kids and we have another teacher who I think is interested in starting a gymnastics (club). These are clubs that are being proposed and hopefully we'll be able to offer them to our kids."

In addition to after school programs, Abrego, who also served as athletic director last year, said the athletic department is stronger than last year and coaches are in place for the upcoming sport season.

"When I came last year, we were trying to find everything, but now, understanding that job, we're way ahead of the game," Abrego said. "We've got our schedules, our coaches, so everything is in place."

The athletic department is excited to offer both boys and girl's soccer team to kick off the school year. An increased interest of girls in the sport led the school to offer two teams.

Students will also see a new learning program in the classroom.

"We have brought in the Beyond Textbook program, it is a curriculum," Abrego said. "Many districts around here use that program to help their students with student achievement and really its very popular and effective."

According to Abrego, three out of the top five and seven out of top 10 performing districts in Arizona use the Beyond Textbook curriculum.

"It's very exciting for our teachers," he said. "It really helps the teachers a lot. They can use textbooks in their classrooms, but this is another avenue that gives them a lot of electronic links that they can use for their students. It gives them all the standards and pacing guides, so it's going to give us consistency in our curriculum."

In addition to six new teachers, Tom Rowland, a retired administrator and teacher from Dallas, Texas, will serve as assistant principal at the school.

"He is a veteran and we are very happy to have him on board as the assistant principal," Abrego said. "We were very fortunate that his wife is a social studies teacher, so they both joined our team."

"We're starting to fill positions, in the past it was very difficult," he said. "Now people are applying online and we're getting a lot of applicants and that gives us an opportunity to pick the best applicants to work here."

Abrego said having experienced administration at the school and being able to build off well over 40 years of experience, between administrators, will be a huge benefit for GCS.

"We're just putting together an outstanding leadership team here," he said. "It's a very experienced team that has seen many, many educational practices throughout the entire United States and we're just trying to bring the best ones here to the Grand Canyon."

Tom Rowland has worked in education for over 43 years, he retired from school administration and continued to work as a high school principal in Houston, Texas for several years before retiring again in 2006. At that time Rowland and his wife headed to the southwest to take their first September vacation. They ended up stopping for gas in Ganado, Arizona, and not realizing they were talking to the director of human resources for the local school, were offered the principal and librarian positions at the school.

Not wanting to go back to work right away, the couple went back to Texas, but three years later the school called and asked them to re-consider.

"Sure enough we took the job and I was there for three years," Rowland said. "Dr. Abrego was superintendent there and after he left I decided to go back home to be with my grandkids."

One year later Rowland received a call from Abrego, who at that time was serving as superintendent of a school in Morenci, Arizona, offering him a position in Morenci.

Rowland accepted and worked with Abrego for another year, before Abrego took the assistant principal and athletic director position at GCS.

"He called me and told me he was coming to the Grand Canyon, I said, 'man if you get a job opening, that sounds like the greatest place in the world to live,'" Rowland said.

Abrego followed up on that comment and the school extended the position of assistant principal to Rowland.

Going from over 2,000 students in some of Texas's largest schools, to Grand Canyon's 286 students does not bother Rowland. For him kids are kids.

"Students are students, they want someone who cares, someone who will keep the peace in the school, be fair with this one and be fair with instruction and make sure that everything is running well," he said. "Most students come to school to learn and that's what we try to do is give them an environment to learn. I've been doing this for many, many years."

Rowland said his goal for the year is to continue to move the school forward and to provide consistent leadership.

"To be as proactive as I can in dealing with the teachers and the students and moving the school forward," he said. "This school has had, last year it had consistent leadership for the first time in quite awhile, from what I understand, and positive leadership. (I want) to be part of that team and help this place get back in the right direction to where it is a true community school and kids can enjoy learning and teachers can enjoy working."