Third time's a charm for Williams Habitat
Williams Habitat in the midst of working on third home with help of volunteers from Williams, Flagstaff and beyond 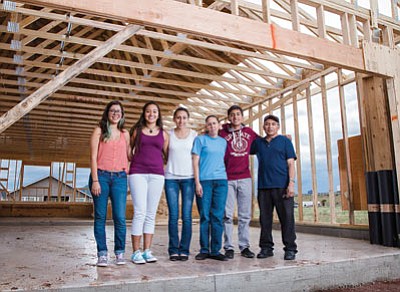 WILLIAMS, Ariz. - Jose Hernandez and his family have lived in Williams for 21 years, but have never owned a home. With the help of Habitat for Humanity and community volunteers, that is about to change.

Jose and his wife Josefina met in Tusayan working at the Best Western. They moved to Williams in 1994, a month before their first child, Diana, was born. Jose worked as a cook for several years and then moved into a bellman position at the Grand Canyon Railway. Josefina works as a housekeeper at Best Western in Williams. They had three more children, Ximena, Rafael and Veronica while living in a variety of apartments in Williams over the past 21 years. In 2007 they moved into their current Sixth Street apartment.

Jose heard about Habitat for Humanity while attending a service at St. Joseph Catholic Church. He and Josefina started the application process in 2013 and were accepted. The family and Habitat were ready to begin building when everything was put on hold.

"We had to stop the process because of the water restrictions," said Williams Habitat for Humanity Executive Director Francis Mazza. "The city stopped issuing new residential building permits because of the drought."

Once the restrictions were lifted, Jose reapplied and construction began on a house located at the end of Wells Fargo Drive in July.

"We had to wait a while, but we know when it's time, it's time," Jose said. "And it wasn't time. But now that we see it getting closer there's excitement growing. We were gone for two weeks and when we came back it was like this...(the foundation and trusses were done)."

The Hernandez children have attended schools in Parks and Williams over the past 15 years. Diana is a student at Yavapai College and Ximena is attending NAU (Northern Arizona University) in August. Rafael and Veronica attend Williams High School.

Habitat families are required to put in 500 hours of sweat equity. Jose and his family have only put in a few hours but anticipate working a lot more now that the frame has gone up on the house.

"There hasn't been anything for us to help with yet," Ximena said. "But I'm planning to help as much as I can before going to school."

Jose is looking forward to his family owning their own home. The home will have four bedrooms, two bathrooms, a garage and a large lot.

"There won't be a whole lot of difference in what we are paying every month," Jose said. "But now the money we put into it...won't be a waste. It will be ours when it gets done."

The Hernandez children are also looking forward to their new home.

"The kids have had a trampoline we bought years ago," Jose said. "We couldn't put it up where we live now, but the kids wouldn't let me sell it. Even though they are too old, the kids are excited to be able put it up here at our new house."

"This isn't just for me and Josefina," Jose said. "This is something for their future (their children)."

The Habitat for Humanity Williams affiliate has built two homes with the Wells Fargo Drive home being the third.

"We're really excited about this family," said Williams Habitat Treasurer Bud Parenteau. "If you know anything about the schools, they're top notch kids...every one of them. One was valedictorian, three of the four have been students of the month with Kiwanis. They're just those kind of kids."

But Williams Habitat has still had to turn families away.

"We've had to turn people down because they don't make enough money," Parenteau said. "That's sad too, but they also have the responsibility. We don't want to put somebody in a house and have them fail. We want this to be a success."

Williams Habitat acquires loans through the U.S. Department of Agriculture. The loans have no down payment, but require a good work history and good credit. Parenteau said that the Hernandez's home costs about $190,000 to build but with the USDA adjusted interest, the family will have a low $650-670 monthly mortgage.

Mazza works with families to improve their financial situations. The previous Williams Habitat homes have been successes and the families are still in them.

"We spend a lot of time...if their credit needs mending we do what we can to help mend it," Parenteau said. "So the next time they apply they can do it."

A selection committee considers the applicants' housing need, ability to pay and willingness to partner with Williams Habitat.

"It took us 10 years to build the first one," Parenteau said. "The second took us five years and this one has taken three. We're getting faster each time."

The Williams' Habitat board has changed members over the years. The board is made up of volunteers and needs the support of the local community to succeed. They maintain a list of volunteers, and utilize the expertise of many local construction experts.

"We appreciate people like Daniel Sutton (of Sutton Plumbing)," said Parenteau. "He has done the plumbing for all three houses. All we do is buy the materials and he does the work. We have a guy who works for Home Depot who buys all the doors and puts them in. Cat from Cat's Roofing has roofed the first two houses and is coming to do this one. She does it by herself. We provide the materials and she comes up here from Phoenix. Tom Ross from I-40 Fleet donated the forklift for the trusses and roof. He even brought his family over on the last house and they painted for a day, so that was pretty neat."

Parenteau said David Reyes out of Ash Fork did the block foundation for the last two houses as well.

"This time we are having to pay for the labor (for the foundation)," he said. "I needed the cinders to be squared around in there, so I found a kid up the street and I gave him $50 to do it. Last Saturday we needed some cleaning up. We put a blurb on the Internet and had five volunteers show up. They just come out of the woodwork, but that's how we do it."

Although Williams' Habitat had to wait to build the third home because of water restrictions, the city of Williams has tried to assist Habitat when possible.

"They bend over backwards for us," said Parenteau. "They wave all fees for us. They only charge us for the new water meter. They've really done a bang up job."

"They learned in class and they learned on the job," Mazza said, "But major construction doesn't require that finesse that building a home requires."

After Mazza retired he moved to Flagstaff and was involved with Habitat for Humanity Northern Arizona. After seven years he decided to shift his focus to the Williams Habitat.

"I'm generally a gopher," Mazza joked. "I do all the grant writing and fill out the government applications. I also work with the family to get them qualified. But the real workers are the volunteers."

Parenteau is the only Williams Habitat board member to remain from the original startup group.

"The postmistress here in Williams was the president the year I got here," Parenteau laughed. "She said 'I need some help,' and I said 'Okay I'll help you,' and then she left that same year. So here I am stuck with it but I've loved every minute of it."

Word spread through the Habitat community about the slow movement with the Hernandez's home.

Habitat for Humanity Central Arizona quickly responded and sent a team of 14 volunteers to jumpstart the process. Over a five-day period, the group put in a floor, trusses, a roof, and walls on the Hernandez's home.

"The summer is slow for us because it is too hot and dangerous to build outside," said Habitat for Humanity Central Arizona Construction Supervisor Joe Genovese. "Our guys jumped at the chance to build a house up in Williams where it is cool."

Genovese said Central Arizona Habitat is the largest Habitat group in Arizona. They build about 30-40 houses per year and serve over 300 Phoenix families through the Neighborhood Revitalization program.

"It's not about the numbers, it's about the mission and the people," said Genovese. "We want to build hope and opportunity. These kids (the Hernandez family) will remember that the community did this for them and the family worked hard for this with sweat equity."

Mazza is happy to have the help.

"I'm amazed that the group came up," Mazza said. "It's the nature of the Habitat people."