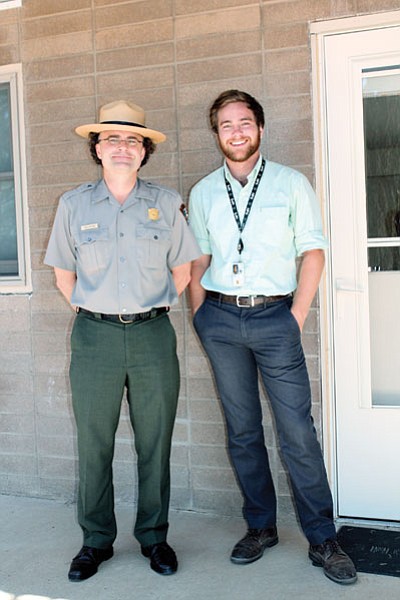 The goal for the week long school was to help raise up leaders in the Alternative Spring Break (ASB) programs. The programs provide various volunteer services in the park and around the country.

The school also promotes active citizenship and volunteering opportunities for the students and helps providing them leadership training and a chance to extend their networks, with the possibility of future careers with the National Park Service (NPS).

"Students are working to create a fire buffer zone along the Arizona Public Service (APS) corridor in the national park," he said. "Because otherwise a wildland fire starts over there in the forest - we want there to be a break in the corridor, so they are helping to provide that."

David Wong, a commander for the U.S. Public Health Services with the NPS who is based out of Albuquerque, New Mexico, traveled to the Canyon to spend a week with the students. Wong believes that taking a closer look at the program, could possibly lead to future possibilities of hosting ASB within the health service division of the park service.

"I'm interested in trying to engage and expose youth to public health as a potential career," he said. "Combining health and public land issues that they could work on as a service project."

For most of the students, volunteering is something they enjoy and being able to reciprocate that and lead future teams of volunteers is an honor.

"For me, volunteering stems from a place where a lot of people say, 'you don't understand how much you've helped me,' but by helping that person, I've really helped myself," said Christianne "Chrissie" Phillips, a first time volunteer at the Canyon. "I am a very outgoing, fun, crazy individual and I get my energy by feeding off other people's energy. So I like to do things that put me in a positive space, so I can feel and translate and spread that positive energy. Volunteering is a great way to do that."

During her time at the Canyon, Phillips hopes to learn from other students and park service personnel about leadership and other opportunities, so she can take those skills back to her university, Southern Methodist University in Dallas, Texas.

"I am really just hoping to get to know how other schools achieve the same things (volunteer projects), because there is a lot of things that we do strongly but there's a lot of things we can improve on," Phillips said. "I just want to take it back and really help us build our program."

Twenty-year-old Joshua Kezar has been with the ASB program since 2012, he also attends SMU.

While this year would mark Kezar's senior year at school, he decided to take a year off to work at Big Cypress National Preserve in Florida.

After spending four years volunteering with the ASB program, Kezar said he felt like he wanted to serve and give back to local communities.

"That's a big part of ASB overall...is that you're taking these trips and you're having these experiences," Kezar said. "They may be on these beach front areas but you're still contributing to their community and not just taking from it. Which is something I find very valuable."

Kezar is also one of 70 centennial volunteer ambassadors chosen by the NPS for the park's upcoming hundred-year anniversary. The ambassadors will represent the park service across the U.S. and will bring in the second century of park visitors, volunteers and employees.

"(We) will create relevant, different opportunities that appeal to youth and younger generations to really create the next generation of environmental stewards and really see those applied over the course of a year," Kezar said.

Kezar has been asked to concentrate on how the park can provide a more focused volunteer program and help develop various outreach programs.

"Right now the volunteer program is very loose, its very set with only one program, we'll have folks come in for six to eight months and live there and work a 32 to 40 hour week, but that's not engaging the local population," he said. "It's not having people who are nearby coming in and investing, instead of 40 hours a week, maybe one day a month."

According to Kezar, the centennial volunteer ambassadors and the park plan to focus their efforts on urban centers, specifically 50 cities identified by NPS.

Over the next year Kezar will be contracted, in conjunction with the Student Conservation Association (SCA), as an ambassador. He plans to complete his studies at SMU the following year.

During his time at the ABCS, Kezar said he hoped to use the experience to help with future ASB programs and to apply what he learns at Big Cypress National Preserve.

During their time at the Canyon ABCS students took time to visit the Canyon and for some, like Phillips, it was their first experience.

"I honestly did not expect to like fall in love with it (Grand Canyon) as much as I did," she said. "It's like no picture, no video...nothing can really translate the beauty of it. It reminds me that I am a fraction of a fraction of this world."