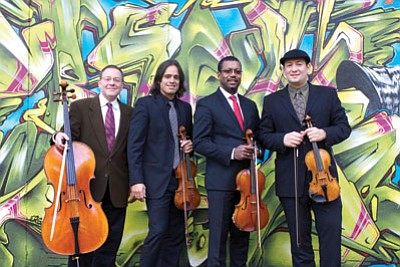 GRAND CANYON, Ariz. - Over the course of three weeks, the 32nd annual Grand Canyon Music Festival will feature musicians from around the country and the world.

The event will have musicians from New York, Los Angeles and Mexico and has a little bit to offer every musical taste.

"I tend to like a little bit of everything and so that's what it kind of ends up looking like," said Clare Hoffman, artistic director for the music festival. "People come to one concert and they think they know what the Grand Canyon Music Festival is and you don't...every night it's something different."

The Festival is full of musicians, with the string quartet group Catalyst kicking off the festival on Aug. 28 and 29.

The next performance will be on Sept. 3 at 7:30 p.m. and will feature The Bonfiglio Group. The group includes Robert Bonfiglio, founding director of the festival, playing harmonica, along with Joe Deninzon on violin and Stephen Benson playing guitar.

The virtuosi will perform arrangements ranging from jazz, classical, rock and pop genres.

Sweet Plantain members are from the Bronx, New Jersey and Venezuela and aim to keep western classical traditions combined with hip-hop, jazz improv and Latin rhythms.

"The Sweet Plantain personality is very much entrenched in South American music and contemporary pop music," Hoffman said. "So that really comes out."

During the Native American Composer Apprentice Project (NACAP) performance on Sept. 6, at 4 p.m., students from the Navajo, Hopi and Salt River Pima-Maricopa Nations will get to hear their original works, performed by the Catalyst Quartet and Sweet Plantain. The students have been studying composition with composers-in-residence Raven Chacon and Michael Begay

The festival will wrap up over the weekend of Sept. 11 and 12 with a performance by David Speltz and his family at 7:30 p.m.

The Family and Friends performance will feature the Speltz family. Hoffman will join them as a 'friend.'

For Hoffman the festival is an annual tradition and is something she looks forward to each year.

Tickets for all performances cost $15 for adults, $8 for children and $8 for local (with proper identification). The festival will be held at the Shrine of the Ages auditorium on the South Rim of Grand Canyon National Park.

More information about Grand Canyon Music Festival can be found at grandcanyonmusicfest.org.