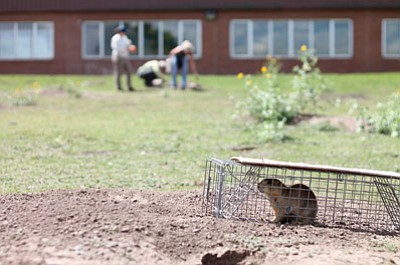 A prairie dog sits in a trap at Williams Elementary Middle School August 3 before being relocated. Ryan Williams/WGCN

The employees pre-baited the 450 traps and left them on the school grounds for several days before attempting to capture any animals. They will continue to set the traps and relocate the prairie dogs twice a day for the next ten days.

"These are just Tomahawk live traps," said AZGFD Wildlife Biologist Mike Rice. "We wire them open so they can't be tripped. We bait them like we normally would so they get used to the bait and they know what it is. Its sweet feed, what you'd feed your horse, and its like candy out here for these guys."

After the animals got used to the traps, AZGFD and forest employees met at the school at 5 a.m. Aug. 3 to set the first traps for capture. After five hours, the employees returned to the site to collect the animals.

"It's 10 a.m. now and what we're waiting for is the activity of the colony to slow," Rice said. "They come out in the morning and they're pretty active and right about now when it starts to get warm the activity really shuts down. "

Once the activity slows, the employees carefully tag, spray the animals for parasites and gather the traps in groups. They keep the females and young together while separating out the alpha males. The males tend to disrupt the relocation efforts and are released on the edge of the new area.

"This is a colony and within the colony there's a bunch of family units," Rice said. "So we try to keep the family units together. If they're already familiar with each other and have that social structure already established, it increases the success of the colony when we release them."

Rice said the the males can be very territorial.

"So we kind of stick them on the outside so they're there and have access but they're not right in the middle busting up those family groups," he said.

Kaibab Wildlife Biologist Roger Joos works directly with AZGFD in the trapping efforts. Joos maps prairie dog colonies in the Williams District and finds adequate relocation sites. He worked with the Williams City Council and AZGFD in the 2011 and 2012 relocation efforts.

The site chosen for the current relocation effort is located north of Parks. It is an extirpated site with burrows but no animals. Employees spread an insecticide on the site to treat for parasites prior to the release of the animals.

"Basically we have an area bigger than it is here right now," Joos said. "So we'll try to establish a couple different family groups...and make sure they have enough room. If you put them on top of each other then they'll start kicking each other out and they're more exposed to predation."

Biologists have found that prairie dogs do much better when relocated to an abandoned colony. They adjust quickly to the new burrows and predation of the animals is limited.

"They are a fossorial animal," Rice said. "They don't do well above ground if you just set them out in a field."