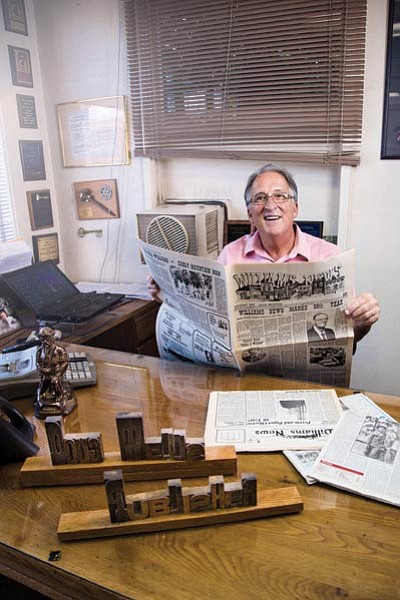 WILLIAMS, Ariz. - For more than 100 years the Wells family has been instrumental in publishing the Williams-Grand Canyon News. But the retirement of long-time publisher Doug Wells at the end of August marks the end of an era.

Known for his community leadership as well as his dedication to newspapering in his hometown, Wells has served as publisher for 37 years. Previously owned and operated by the Wells family since 1913, Western News & Info, Inc. purchased the newspaper in 1992 and retained Wells as publisher.

Wells also served as publisher of the Navajo-Hopi Observer based out of Flagstaff.

"I am very proud of my years guiding the Williams-Grand Canyon News in my hometown of Williams, and have enjoyed working closely with the community in facing the many issues and exciting events that have shaped our town." Wells said.

Wells' involvement and leadership role in the community include 36 years and a past presidency in the Williams Rotary Club, a three-time past Chairman of the Board and board member since 1978 in the Williams-Grand Canyon Chamber of Commerce, and an initiator of the Bill Williams Monument Committee, which worked to build Monument Park and the Bill Williams Monument in Williams, dedicated in 1979 by Barry Goldwater.

Frank Wells achieved a notable career as publisher of the Williams News for over 50 years. He was named "Dean of Arizona Newspaper Men." The second generation began when Frank Wells' son, F. Evarts Wells Jr. started working at the newspaper at a young age, and continued being a part of the weekly publication throughout most of his adult years.

After serving in the Navy during World War II, Evarts Wells returned to Williams to work at the newspaper alongside his father. F. Evarts Wells, Jr. His wife Cecil had four sons and it was their youngest son Doug who was drawn to the family tradition of newspapering.

Working alongside his father many nights, weekends and summers in his youth, Wells returned to the newspaper after graduating from Northern Arizona University in 1976.

Upon his father's death in 1978, Wells assumed management and became the third generation to publish the Williams News. His mother Cecil Wells, who had worked at the newspaper for many years, worked with her son until her retirement. Wells continued the tradition begun by his grandfather, actively adding a voice to community issues and civic improvement policies.

In 1992, the Williams-Grand Canyon News was sold and became a publication of Western News & Info, Inc. (WNI).

"It made great economic sense to join a larger newspaper group and helped us to keep up with technology and blend with other publications in the state," Wells said.

WNI has a long tradition of newspapering in Arizona and is owned by the Soldwedel family.

WNI Executive Vice President Kit Atwell said since selling the paper to WNI, Wells has been an integral part of the company's management team maintaining his publisher role with The Williams/Grand Canyon News and taking on the responsibility of the Navajo-Hopi Observer.

"Doug has been an asset to Western and will be sorely missed," Atwell said. "While we hate to see Doug leave we wish him the best in his retirement.

Wells added he is proud of what the paper has accomplished and the wide-ranging support the paper receives from the business community and readers.

"In this time of challenges facing the newspaper industry, the Williams-Grand Canyon News still stands strong in bringing quality community journalism to Williams and the surrounding areas," he said. "I have worked in the newspaper industry all my life, and it has been a rewarding career."

Wells said he wants to take a new direction and take time away from the many demands and deadlines, which are a part of newspapering.

"I look forward to spending more time with my wife Ann, our children and grandchildren," he said. "I have many hobbies and activities to enjoy as I face this new lifestyle ahead."

Debbie White-Hoel will step in as publisher beginning in mid-August.

White-Hoel started at the Palo Verde Valley Times in 1996 as a receptionist circulation clerk. She was promoted to general manager in 2000 and promoted to publisher in 2003. She will split time between Blythe and Williams weekly.

"Western News &Info has allowed me to expand and grow in my new community of Williams and Flagstaff Arizona and still spend time in my home town," White-Hoel said. "I know this opportunity will be very challenging, fun and exciting and I look forward to all the changes coming my way. I want to thank the Blythe community for all the support they have shown over the last almost 20 years, and I am glad that I will still be able to spend time here in Blythe."