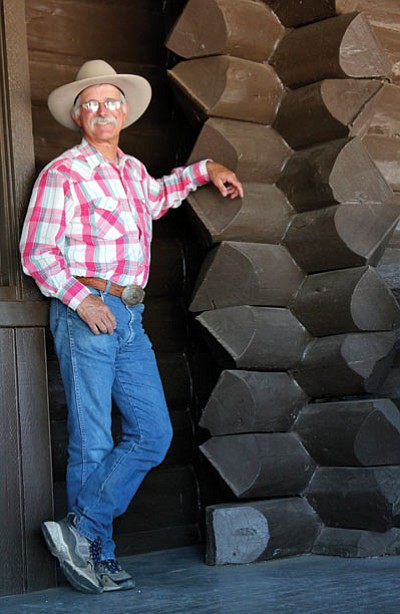 GRAND CANYON, Ariz. - Traditional western music made its way back to the South Rim of the Grand Canyon on July 28 when western music legend Dave Stamey gave a free concert at the Shrine of the Ages.

Stamey is a nationally acclaimed artist, who writes original lyrics about the western lifestyle - drawing from many of his own experiences.

While this was Stamey's first performance at the Canyon, he is no stranger to the operations at the Canyon - specifically the mule trains and their guides.

Stamey worked with Grand Canyon livery manager John Berry's brother, Mark, during his time in the Sierra Nevada Mountains and during his free concert, many mule packers and guides showed up for the concert.

Born in Montana before moving to the central coast of California when he was 12, Stamey has lived and worked with cowboys all his life.

Later he went to the eastern Sierra Nevada Mountains where he packed mules. He also spent 12 years running the horse program at the Alisal Guest Ranch in central California before turning his musical talent into a career.

"I started playing guitar when I was 12," he said. "I played all through high school and after high school I did the bar thing - playing in bars, but that wasn't my thing."

He picked the guitar back up 10 years later while packing mules for an outfit.

"My wife said, 'well, you should take your guitar and sing for these people around the campfire,'" he said. "So I did it and this got started."

Since then Stamey has spent the last 20 years building his career and performing around the country.

"I'm a pretty fortunate guy and I know that," he said.

Stamey said he owes his career to the popularity of traditional western music during the mid 1980s and '90s.

"It got a lot of popularity, it's probably the reason I have a career," he said." It's sort of tapered off now, but I've managed to assemble an audience of my own now. I'm building on that and places to go every year. It's like any other business, it's all about relationships."

Over the years Stamey has seen the audience for western music slowly transition from an older crowd back to the younger generation.

"For a long time it was (older), I'm finally seeing a shift where I'm getting some newer folks," he said. "Because I want this to keep going. There's going to be guys that come on after me and I want them to have somebody to play to."

In order to not just survive but to make a living in the western music industry Stamey said a person needs a lot of determination and commitment.

"It's a lot of hard work," he said. "A lot of people are looking for the quick buck, they want some sort of fast success and that's not how it works. I built this thing room by room over the last 20 years. I come into a room, there's 20 people that I play to, the next time I come in, there may be 30 or 40. It's just commitment and lack of any other options. Stubbornness and obstinance apparently."

Going back and continual persistence paid off for Stamey, who will release his 11th album later this fall.

However, what keeps Stamey on the road, doing what he loves, is meeting people in small towns across America.

"I get to see beautiful country and I get to meet people who live in small, rural communities who really like it that I'm telling their stories," Stamey said. " Because, these days the media sort of celebrates the urban stuff, they don't pay much attention to the rural people and the small communities and they're still a huge part of this country. Seeing these little rural communities. It does my heart good, (to know) they're still out there."

In 2010, 2011 and 2013 True West Magazine named Stamey the Best Living Western Solo Musician. He has been voted six times Entertainer of the Year, six times Male Performer of the Year and five times Songwriter of the Year by the Western Music Association, and received the Will Rogers Award from the Academy of Western Artists.

Stamey's latest album "Western Stories" will be available this fall and can be purchased online at davestamey.com., amazon.com, iTunes and rhapsody.