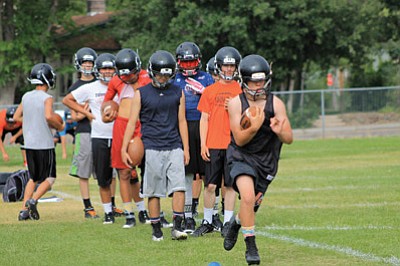 WILLIAMS, Ariz. - Although players have been involved in workouts for much of the summer, preseason football training began in earnest last week for Williams High School.

Players wore only shorts and helmets during practices as coaches ran offensive and defensive drills and players focused on conditioning.

The team begins the new season with a change to eight-man football. They will be in Division 6 along with Mogollon, Telesis Prep, El Capitan, Mayer, Fredonia and Joseph City. They have two freedom games against Pima and Bagdad who were both in the top four at the State Championships.

"My record is 46-14, however I have five first round play-off losses," Brownlee said. "We go down there (during eleven-man) and play the bigger schools with more depth and it's impossible."

Brownlee believes that Williams will be a contender for an eight-man state championship. He said that Williams is going to have to prove themselves to the other teams. He says the number of players on the field changes, but the rest of the game is the same.

Williams has a competitive schedule with games beginning August 14 at home. He believes the reduced number of players on the field will allow more depth to the team.

"We will have guys playing both ways (on the offensive and defensive lines)," Brownlee said. "But we can now put somebody in there who will give the players a good rest and our level of play won't drop much. We'll still be very competitive."

Brownlee said that the team struggled with their lack of depth in eleven-man. When starting players needed a break, the team struggled. This led the coaches to keep the top players in longer, which was tough for them by the third and fourth quarter, especially if they were playing both ways.

"It's just competition all over the field now," Brownlee said. "We have great competition between players. Some of the best lineman I've had. These kids are working hard to claim their positions."

The team is heavy on juniors and sophomores, with only two seniors and one freshman on the team. Brownlee is looking at Martin Soria and Christian Ramirez as quarterbacks. Ramirez broke his arm in his first game as a freshman, and sat out his sophomore year. Soria is a sophomore who is multi-skilled on the field. He has speed, but both players are good at the inside-outside zone reads.

"Its good competition between those two," Brownlee said.

Daniel Lopez is another strong returning player. Lopez was the starting running back last year and played seven games before an injury sidelined him.

"He is a good kid and fast," Brownlee said. "I think we are a very fast team, I'd have to say our overall team speed is an 'A' if we are grading it."

Defensively Brownlee is looking for Mario Pedzara and Juaquin Gutierrez to lead the team along with transfer student Art Martinez. Martinez moved from Riverside, California this summer.

"The kid is going to be a tough football player," Brownlee said. "He's really stepped up his game coming from the Riverside area, and our kids have stepped up as well."

Brownlee said the dynamics of eight-man football are much different than eleven-man. He said the game is much faster and there is a lot of pressure on the defensive side. He said that if a player breaks through the line, there's a good chance it will be a big play.

"You only have eight guys out there and it seems like you're always one guy short," Brownlee said. "You better be a quick team, because this is a fast game. We're hoping our linebackers will be quick."

Brownlee said that he will be looking for speed from linemen Ethan Johnson, Tate Grantham, Soria and Lopez. The team plays a 3:2 attack defense, with everyone having a specific assignment.

"If they handle their assignment we'll be okay," Brownlee said. "But if they blow an assignment and make a mistake, we're going to pay dearly."

"We're going to be tough for the next three years," Brownlee said. "If you look at that, we have a lot of young kids. All these kids except Big Joaquin and Mario will be returning, it will be fun in years to come, a good deal."

Williams is playing a Towel Scrimmage at 6 p.m. on August 14. This game will be an inter-squad scrimmage at home. Williams High School Athletic Director Phillip Echeverria is encouraging parents and spectators to bring new and old towels to donate to the athletic department.