Reduce, reuse, recycle: students step up during Earth Day events
Grand Canyon students go extra mile for Earth Day, learn to take care of planet 'Not because we have to but because we want to' 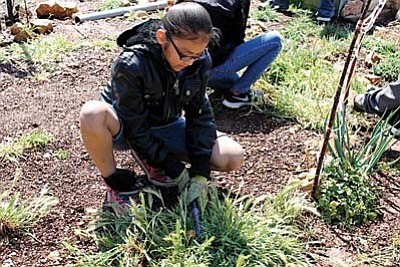 Together they strive to involve the entire school by having a day long, fun-filled event that students from kindergarten through twelfth grade participate in.

Kelsey Johnson, a resource education intern and Youth Conservation Corp (YCC) coordinator at Grand Canyon National Park, coordinated the event this year and said the school and park's goal is to help foster the students' respect for the Earth and to help them learn good stewardship habits.

"They live in Grand Canyon National Park and the park takes so much care in taking care of this piece of land, that we are all so lucky to live on," she said. "So it's hoping that the students will also get that feeling...that they want to be outside or if they see a piece of liter they'll want to pick it up and if they have the option to recycle they're going to do that."

Elementary students and rangers from Grand Canyon National Park kicked off Earth Day events during a morning assembly and middle and high school students started their day with environmental education rangers at the school's soccer field for a morning of team building games.

After a meet and greet with Smokey the Bear, elementary students met with an assigned ranger from the park for an hour of education programs.

"A lot of them are focusing on our theme this year which is reduce, reuse, recycle," Johnson said. "After that they are doing an hour and a half of service learning projects."

Depending on the grade and the ranger, students had the opportunity to help with several different projects. Projects included watering pre-existing plants, cleaning out mulched areas and removing pinecones and rearranging rocks around the school.

Juniors and seniors at the school also helped by replanting new vegetation at the school. Some of the plants included the Mountain Snowberry, Fern Bushes, Currants, Verbena, and Hoary Aster along with an assortment of grasses.

"A lot of the grades are working on removing the invasive plants around the school, because they have completely taken over," Johnson said.

Additional events throughout the day included a toxic waste game, a recycle relay and decorating paper bags that will be used at the Grand Canyon Village Market, which are returned to the market, to encourage visitors to remember to recycle.

One of the focuses for GCS Earth Day celebrations include a project for the school that will impact students directly through the trash they throw away each day at the school's cafeteria.

"The ninth graders for the past few weeks have been working on getting recycling and composting into the school cafeteria," Johnson said. "Currently they don't recycle any of the materials, they throw them all in the garbage. So they're kicking that off and we're going to have composting at the cafeteria and hopefully that is something that will continue to happen throughout the rest of the year and school years to come."

Students from the fourth grade, under Deb Goepfrich also helped prepare the community garden for spring planting. Johnson said all of the projects and events planned for Earth Day are to help raise students awareness of the world and environment they are a part of, which she thinks many students already understand.

"I think the main purpose of Earth Day is for the students to get outside and have a good time and feel an attachment to their surroundings so they're more likely to take care of it in the future," Johnson said. "One of my students said it perfectly, they said 'It's a day where we go outside and we take care of the Earth not because we have to but because we want to.'"