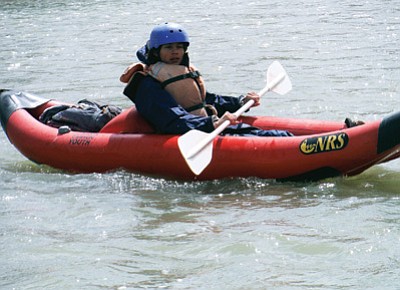 GRAND CANYON, Ariz. - With smiles on their faces and adrenaline pumping through their veins, nine Grand Canyon School students and their chaperone, Lori Rommel, braved rain, snow and freezing temperatures to arrive at the end of their four-day river trip down the upper San Juan River.

"It was 41 degrees and sunny and cold," said Rommel, an English teacher for seventh and eighth grade at Grand Canyon School (GCS) and school coordinator for the event. "At one point, I think it was day three, when we were going into the Canyon, everyone was as cold as they had ever been in their entire lives. So we had to just acknowledge that, 'Today is a cold day.' They were resilient; there was so much laughter. I tell people that even though we were cold, our hearts were warm."

Not only were new experiences and memories made on this year's river trip, the group also made new friends and were introduced to river rafting.

"I call it the curriculum of life and enjoying new things," Rommel said. "My goal is for the kids to have fun and to experience something new and who knows, maybe they might want to become a guide or support GCY, it might peak an interest that they never knew they had."

Traditionally GCS floats the Colorado River, but this year they decided on a different route and went down the upper portion of the San Juan River.

For over 10 years, GCS has taken an annual river trip, through a partnership with Grand Canyon Youth (GCY), a non-profit organization that works with schools in Flagstaff and around Arizona and the country which offers educational river programs and trips to youth.

For the last four years Rommel has spearheaded the program and planned the trip with GCY. Each year GCS partners with another school from northern Arizona for the trip.

For the last several years Northland Preparatory Academy (NPA) and GCS have gone on the trip together.

This year NPA had a total of 10 students and one teacher going on the trip while GCS had nine students including two seventh graders, five eighth graders and two ninth grade students that went on the trip. Altogether the trip had 19 students, two teachers and five river guides for the four-day, three-night trip.

Despite temperatures dipping to 41 degrees and rain and snow showers, Rommel said it was one of the best river trips she has taken with GCY and being on the San Juan River was a unique experience for them all.

"We thought we would try something different and what a great trip it was - such a fabulous trip," she said.

GCY distinguishes itself as an educational outdoor organization in their approach to river trips and makes learning experiences on the rivers a top priority and also a requirement for the trip. Together, teachers from the school, organizational leaders and GCY plan each river trip and the lesson/program students will learn while on the river.

"When they spend five days on the San Juan, for example, they're not missing school, they're doing school on the river," said Dorthy Haymon program director at GCY. "Which is really cool because we are taking the classroom outside and they're able to apply things they've learning in the classroom."

Rommel said this year was an exceptional year of working with GCY coordinators to plan the trip. A bonus for everyone involved as well as an essential part of the trip is the experienced river guides who accompany each expedition.

"This year we even got an email from the trip guide before the trip," Rommel said. "Dorrie (Haymon) has just done an amazing job putting everything together."

This year students from GCS decided on six different projects that were interactive and educational presentations about the Colorado Plateau.

While they were on the river, both GCS and NPA students presented projects.

GCS students gave talks about petroglyphs and pictographs, plants and animals and different ways you could die from toxic plants while on the river (played interactively with a game of tag). Students also got hands on skills by helping with camping and hiking on the trip.

"Cooking and camping skills and hiking and going to these different historical and archeological sites helps integrate the place into the experience," Haymon said. "It is truly a custom and collaborative trip in which the kids are really driving most of the learning."

That is exactly what GCY is about, educational trips that allow students to learn and grow while having a once in a lifetime opportunity. Over the years, Haymon said GCY's unique program has become popular over the years and works with schools and other groups from around the nation.

"We run custom educational river programs with schools, currently we probably partner with about 15 different schools and are running around 30 programs this year," Haymon said. "We have a couple schools where it has become an engrained part, where they might have a Grand Canyon Youth Club and every August at the beginning of school they have a long list of kids who want to go on the river trip."

For Rommel planning the trip starts at the beginning of every school year when she holds an interest meeting for parents to see how many students are interested in going.

"We really want that youth buy-in...doing some sweat equity, doing some fundraising, going out in the community, doing a community service project that means something to them," Haymon said. "That's all part of the GCY experience."

This year GCS students acquired community service hours by wrapping angel tree gifts and helping the Lions Club with its rummage sale (the Lions Club also donated $500 toward the trip),

"Some kids earn their hours with the group, some did it on their own," Rommel said. "One girl worked at the horse stable cleaning and another student volunteered his time being a ball chaser during soccer games."

Students also have to pay to go on the trip, which starts with a $200 deposit that goes directly to GCY. Additional funds raised for the GCS trip totaled $3,300. Fundraising was partially achieved by candy sales from Canyon Candy business at the Canyon.

As a non-profit organization Haymon said GCY tries to keep the costs as low as possible. They have fundraising events and work with businesses around Flagstaff to help raise awareness for GCY. They are able to get access to the San Juan and the Colorado Rivers through partnerships with NAU (Northern Arizona University), the Hualapai Nation and the National Park Service. According to Haymon GCY's partnerships are part of an initiative to preserve river access for youth.

Because of the popularity of the trips, GCY, for 2015, is on a waitlist but schools and other organizations are encouraged to fill out an application if they would like to be added to the waitlist.

There are several different trips to choose from based on age groups of students and GCU offers trips on the Upper San Juan River, Lower San Juan River or Diamond Down on the Colorado River.

GCY also offers full Canyon trips on the Colorado for high school students during the summer. GCY has also done trips with the Boy Scouts.

Trips are normally required to have between two or three teachers or organizational leaders accompanying the students in order to provide a ratio of one to four, adults to youth. GCY also provides around four river guides for a trip containing 18-20 youth.