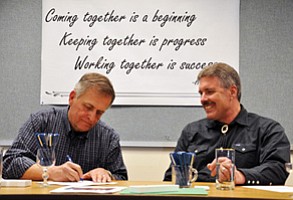 FLAGSTAFF, Ariz. - On April 17 supervisors of the Coconino and Kaibab National Forests signed a record of decision for the Four Forest Restoration Initiative (4FRI) which is an effort to restore 1 million acres of at-risk ponderosa pine forest across northern Arizona.

Larry Voyles, director for the Arizona Game and Fish Department, applauded the signing and said it was a historic day for conservation efforts around the state and the country.

"This is a historic day for conservation in Arizona and the nation as a whole," he said. "Our Southwestern forests have borne the brunt of catastrophic wildfires for over a decade, conflagrations that have adversely impacted local communities, wildlife habitat, wildlife-associated recreation and resource-based economic activity. I'm optimistic that we have finallyFrom Page 1B

turned the corner to embrace a collaborative, proactive approach to conserving and actively managing this natural legacy for current and future generations of Arizonans."

Through the 4FRI decision, forest managers are able to implement restoration activities - from watershed maintenance and habitat improvements, to prescribed burning and thinning, on a much larger scale. The goal of 4FRI is to increase the pace and scale of forest treatments in northern Arizona in order to increase resilience and function of the ponderosa pine forest and restore the fire-adapted ecosystem.

Voyles expressed appreciation to the U.S. Forest Service, the diverse group of 4FRI stakeholders, and the Arizona governor's office for bringing this effort to fruition.

"It's been a long haul and we've cleared hurdles that naysayers said were insurmountable," Voyles said. "But we're not done yet, we need to translate this success to other Arizona forests that are at risk and in need of restoration."

Arizona Game and Fish said one such area is the Kaibab Plateau, the home to the iconic Kaibab deer herd and extensive tracts of old-growth ponderosa pine.  The Forest Service recently initiated the Burnt Corral Project, a new collaborative restoration effort for that area.

Voyles supports the Burnt Corral Project and said the proposal of a Grand Canyon Watershed National Monument could prevent restoration efforts of the Kaibab Plateau.

"Restoring forests on the Kaibab Plateau is a top priority," he said. "However, we are concerned that a recent proposal to convert those lands to a national monument via unilateral executive action will deprive the public of their voice and add layers of bureaucratic overhead compromising our ability to maintain forest health, wildlife habitat, and other important resource values."

More information on thinning task orders and other 4FRI efforts can be found by visiting the 4FRI website at www.fs.usda.gov/4FRI.com.