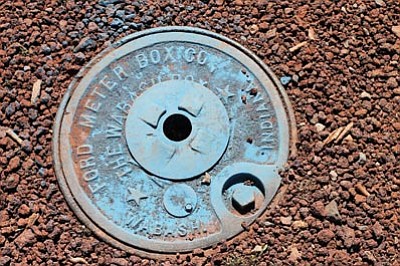 The city of Williams hopes to save around $380,000 per year in lost revenue after replacing about 1,500 old water meters. Ryan Williams/WGCN

WILLIAMS, Ariz. - Williams' water meter replacement program has been delayed, after the company who submitted the winning bid realized they had forgotten to include some costs.

Williams City Council members originally voted to award the bid to Mountain States Pipe and Supply at their March 26 meeting. The company's bid for replacing about 1,500 water meters, installing three towers that would read the meters, and completing any concrete and dirt work came out to $1,412,990. Along with a staff contingency of $141,299, the total project cost came to $1,554,289.

After council members approved the bid however, Mountain States realized they had not included the state prime contracting tax, which came out to $95,518. This increased the total cost of the project to $1,508,508. After accounting for a 10 percent contingency to cover unexpected civil work, the total project cost is estimated to be $1,659,358.

"That puts us over our $1.5 million that we've got earmarked from our WIFA (Water Infrastructure Finance Authority) loan and would wipe out any contingency...which we fully suspect we'll need at least the 10 percent contingency for this project," City Manager Brandon Buchanan said at the council's April 9 meeting. "So with that addition in there, it would make the budget very tight. There's not a lot of room for those contingencies that we do expect."

Mayor John Moore recommended rejecting the bid because of the price increase and suggested re-soliciting proposals.

"There's some unanswered questions in some of the bids. They probably are not as complete as we need them to be," he said. "We're not getting rid of the project, we're not telling the people that bid that they can't resubmit bids."

Buchanan said he hoped staff could bring the new bids to council at their next meeting or at their first meeting in May.

"The deadline to get it done is entirely self imposed at this point," he said. "Our obvious goal based on some of our earlier discussions is we need to get this project done from the revenue standpoint going into our budget next year."

The city is undergoing this project because as water meters age, they gradually start to under-register the amount of water customers use, meaning residents are paying for less water than they are actually using.

City staff estimates that the city is not billing for about 40 percent of the water it is producing, which translates to about $380,000 in lost revenue annually.

The water meter replacement program is one of the projects that the city will pay for using its $3.5 million Water Infrastructure Finance Authority (WIFA) loan. About $1.5 million of the loan amount was allotted for this project. Since it is a green project, the water meter replacement program allowed for $1.5 million of the loan amount to be eligible for forgivable principal

The additional revenue that the city will collect from the new accurate water meters will go toward repaying the WIFA loan.