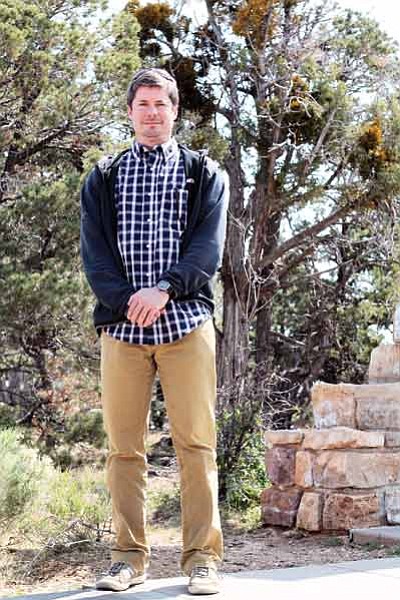 GRAND CANYON, Ariz. - Kevin Fedarko has worked as a part-time whitewater guide on the Colorado and is the author of "The Emerald Mile, the Epic Story of the Fastest Ride in History through the Heart of the Grand Canyon."

The true story unwraps the events surrounding one of the most talked about tales on the Colorado River. It shares the story of a river trip taken in 1983 through the Grand Canyon by three river guides.

The guides made the trip on a wooden dory after floodwaters were released in lethal force from Glen Canyon Dam. The flood, created by a record El Nino weather pattern that year, would turn the trip into legend where it would be proclaimed as the fastest river trip ever made through the Canyon.

Fedarko spoke briefly about his book, which won the 2013 National Outdoor Book Award, at the Shrine of the Ages auditorium on April 18. But he gave most of his time to representatives from the Grand Canyon Trust and Save the Confluence, local environmental and advocate groups fighting development projects at the Canyon.

"This right here is what many people view, rightfully so, as the crown jewel of the National Park system and this is unquestionably one of the most extraordinary and iconic pieces of landscape that we have in the United States," Fedarko said. "By virtue of its status within the National Park system you would think that this place, is sacrosanct and inviolable. That this is the most protected piece of real estate in the country but it's not. It is confronted by all four points of the compass."

According to Fedarko, one side effect to authoring a best-selling non-fiction book about the Canyon is the point of access the book allows him to share with the public. Not only is he able to share the legendary tale of the Emerald Mile but is also able to raise awareness on controversial issues surrounding the Canyon.

"Oddly enough this started off as a book tour and I discovered that when you put a book into the world you're the locomotive pulling the book and then the moment that book comes into the world, that relationship is reversed, I become the caboose and the book pulls me," Fedarko said. "The book has become a vehicle for talking about a larger set of issues that have to do with conservation and protecting the Grand Canyon from this set of direct and immediate threats."

Some of the issues Fedarko speaks about include the Escalade project along the eastern edge of the Canyon, which seeks to build a tramway to the bottom of the Canyon.

Fedarko maintains the Grand Canyon is set apart in many ways - by the number of visitor per year and the vast amount of acres it encompasses, but one thing unique about the Canyon is it's ability to foster change that will effect the entire National Park Service.

"The reason for that is one of several things, things that set this place apart and makes it different is it is better known than almost any other place, it is more recognized instantaneously by more people than almost any other place and therefore it carries a symbolic freight that sets it apart and renders it unique," Fedarko said. "What happens here - good, bad or indifferent, matters tremendously and reverberates throughout the system. It has tremendous implications."

As an internationally recognized site, Fedarko believes that what happens at the Canyon is capable of laying that foundation of change and will be one of the greatest conservation decisions made.

"I feel that this is one of the great conservation challenges that this generation faces," he said. "You build a tramway that can carry 10,000 people per day to a restaurant at the confluence or you amend the flight restrictions in western Grand Canyon so you can go from zero helicopter flights per year to 50,000 flights per year and those changes will reverberate in terms of management decisions that are made in National Parks and public lands throughout the United States."

Fedarko said these decisions - stopping or allowing tramways, over flights, developments, uranium mining at the Canyon and other issues make statements statements with lasting implications.

Raised in Pittsburgh, Pennsylvania, Fedarko worked as a staff writer at TIME Magazine and has written for Esquire and Outside magazine, where he also worked as a senior editor. His assignments as a freelance writer have taken him around the world but after discovering the Grand Canyon and more specifically the Colorado River, Fedarko became an indelible advocate and voice of the Canyon.

His experiences as a whitewater guide gave him the credibility and insight into the world below the rim and have helped form his future as a Grand Canyon advocate.

Fedarko's initial interest in the Colorado and the Grand Canyon started in 2003 when he signed up for a back country emergency medical training in order to better equip himself while on freelance assignments.

The Wilderness First Responder (WFR) course was offered to him through O.A.R.S, a commercial river outfitting company based in Flagstaff and included a 10-day trip into the Canyon.

"That was my introduction to the Grand Canyon. That was where I was bitten by the bug," Fedarko said. "I came out of that with this very strong sense that I had to find a way to quit my job and work as a river guide down at the bottom of the Canyon."

For the next six years, during the busy river running seasons, Fedarko suspended his work as a freelance writer and ran the river as a groover - the duty bound latrine maintainer essential to every raft trip.

"I was an unpaid apprentice and I was really bad - I was a terrible oarsman," Fedarko said. "(I) never really became a dory guide."

Fedarko is still known on the river by his nickname "Groover Boy."

With six seasons under his belt as a groover, Fedarko heard many stories about the river, one in particular was legendary and Fedarko decided he would research and write about it in his book "The Emerald Mile."

For the last year Fedarko has traveled and lectured around the inter-mountain area on the west coast to promote "The Emerald Mile." He currently lives in Flagstaff, Arizona.