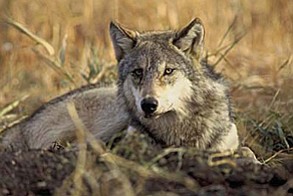 The Endangered Species Act protections across most of the continental United States, and would give individual states the authority to manage wolves. Submitted Photo

PHOENIX - The state of Arizona, on behalf of the Arizona Game and Fish Department, filed two motions, April 15, aimed at protecting the state's interest in the Mexican wolf reintroduction program and recovery of the endangered wolf in east-central Arizona and New Mexico.

Arizona filed a motion to intervene in the lawsuit Center for Biological Diversity versus Sally Jewell, which concerns the recently-revised 10(j) rule that governs the management of Mexican wolves in Arizona and New Mexico. The state filed a motion to intervene to defend its trust authority over wildlife conservation in Arizona and its involvement in the revision of the 10(j) rule.

The state also filed a motion to dismiss the suit based on the court's lack of subject matter jurisdiction since the plaintiffs are unable to demonstrate their interests have suffered due to the revised 10(j) Rule.

"Given that the new rule governing Mexican wolf recovery provides more habitat and potential for population growth than the rule and permit it replaced, the plaintiffs cannot demonstrate that their interests have suffered as required by law," said Robert Mansell commission chair of the Arizona Game and Fish.

The revised 10(j) Rule increases the Mexican wolf population objective from at least 100 animals to a range of 300 to 325. It also eliminates the previous recovery area where wolves could live to a three-zone area that eventually expands their range ten-fold.

"The new 10(j) rule is based on sound scientific principles and helps address critical stakeholder concerns that have long been the primary obstacles to successful recovery of wolves. It's a positive step in the right direction," Mansell said.

The Arizona Game and Fish Department is also working with the Arizona Attorney General's office to challenge the U.S. Fish and Wildlife Service's failure to develop an updated Mexican wolf recovery plan that incorporates Mexico, which has historically held 90 percent of the habitat for Mexican wolves.

More information on Mexican wolves, can be found at www.azgfd.gov/wolf.