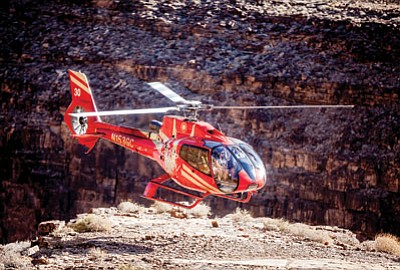 An EC130 Papillon helicopter prepares for liftoff at the Grand Canyon. Photo/Papillon Group

GRAND CANYON, Ariz. - Papillon Group is celebrating 50 years of scenic flights in and around the Grand Canyon and will unveil its "Golden Helicopter" on April 16 at Papillon's Boulder City Aerocenter in a five helicopter formation.

After the helicopters land, members of the Hualapai Tribe, a partner of the Papillon Group, will bless the golden helicopter.

On board will be three generations of the Halvorson family, including Elling Halvorson, chairman and founder of scenic flight tour group.

Papillon started flying tours over the Canyon in 1965, after Halvorson realized the potential for air tours in the area.

Prior to starting the company, Halvorson owned and operated Elling Halvorson Inc., a construction company known for taking on difficult construction projects in hard to reach places like the oil fields, the mountains of California and the Aleutian Islands.

Because of the level of intensity and remoteness of the jobs, Halvorson started using a helicopter to deliver the crew, materials and other supplies to the sites.

Halvorson was in the midst of constructing a microwave tower for AT&T atop the 9,400 foot Echo Summit in the Sierra Nevada Mountains when he purchased his first helicopter, a Bell 47-G3B1.

"My company was used to doing difficult work in difficult places. That was kind of our plan," he said. "We were getting jobs and trying to get work that other people would pass on. We would give the ingenuity we believed we had to this work and figure out how to do it."

Halvorson's company was hired to install the 13.5-mile long trans-canyon water pipeline reaching from the North Rim to the South Rim of the Grand Canyon.

At that time, it was largest contract the National Park Service had ever awarded.

According to Papillon, the project remains the largest helicopter-supported construction project ever completed in the U.S., requiring more than 25,000 flight hours.

"We had done a lot of work in remote areas and we had experience," Halvorson said. "Probably only a fool would have done such a difficult project."

Halvorson was not a fool and his hard work paid off when he realized there was a substantial business opportunity staring at him.

Some of his construction workers had started to request scenic flights on their days off and the idea of charging people for scenic flights took root.

"Over the course of several years, we took hundreds of people down (into the Canyon)," Halvorson said. "When they flew in they were utterly spellbound by the trip. To many of them it was like a religious moment, others were just awestruck by the pure beauty and immensity of the Canyon."

After talking to many passengers, Halvorson found people considered it an experience of a lifetime and one they would pay to have.

"I saw an opportunity there and started an operation in 1965," Halvorson said. "It started out very small with a little shack by the side of the road."

Halvorson put three jet ranger helicopters out for business and used his construction company to support it for the first few years.

"The word started getting out and people started knowing about it," Halvorson said.

Over the years they helped pioneer the way to develop quiet technology for the helicopter tour industry. Halvorson and his innovation also challenged the leading helicopter manufacturers to address the need for quiet aircraft, according to Papillon.

The building of Papillon's renowned state of the art helicopter terminals and facilities located at Grand Canyon National Park Airport and later at the Las Vegas/Boulder City Municipal Airport were a part of his vision.

"When we first started, we were really close with the park," Halvorson said. "They really helped promote us, they are our neighbors. In general we have an excellent relationship with them."

When they first began operations Papillon was not required to get special permits by the park. Papillon also learned early on what customers wanted.

For some the cost of the flight was a little steep, but Halvorson convinced them it was one of the best ways to see the Canyon.

"The Canyon is made for the airplane or helicopter because there is really no way you can see that Canyon unless you spend months there," Halvorson said. "That's the reason it became so popular. It is just the best way to see all the Canyon in a short amount of time. Some people can't do it because of the cost but a lot of places you have to pay as much for a game of golf as you do for a helicopter flight in a three and a quarter million dollar helicopter."

In 1986 Halvorson's daughter Brenda joined the company and became President/CEO in 1993. Since then Papillon has increased its daily passengers by 600 percent and Papillon's fleet of helicopters and airplanes has increased from 23 to 75.

"We've been blessed with a good family with good business judgment abilities and an honest approach to business," Halvorson said. "I believe that is an important part of our success as well."

Papillon has continued to expand and create partnerships with the Havasupai, Hualapai and Navajo Nations and has increased its operations to include Grand Canyon West; McCarran International Airport; Boulder City Municipal Airport and Lake Powell/Page, Arizona.

The family has continued to acquire multiple brands and companies and plans to move forward with its flight and tourism industry and advocate for quiet technology for over flights at the Canyon.

"Our legacy is our greatest asset moving forward," Brenda said. "Our goal is for Papillon to continue to grow through diversifying our tour experiences, being innovative within the aviation and tourism industries and protecting the environment as we remain on the forefront of advancing quiet technology."

Elling said Papillon's next 50 years depends on the future and current generations of Halvorsons.

"I probably won't be around, I'm 83 now, so where it goes - who knows, but knowing my family, Papillon will be a leader in the industry," Halvorson said. "They will be a significant touring company and the third generation is going to be responsible for taking it to the next level - whatever that might be."

In January, Halvorson received the Vertical Flight Hall of Fame Award during the 12th annual Living Legends of Aviation awards.

He is currently writing his autobiography, which will be released later this year.