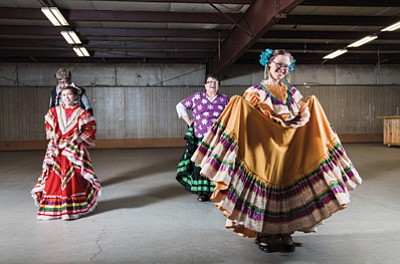 WILLIAMS, Ariz. - Hundred of miles north of the border, a Mexican tradition has taken root in Williams, where it's continued to thrive for about 20 years - folklorico dancing.

Armando Padilla has taught the traditional dance form for about 25 years, both in the Valley and in Williams.

"Each state (in Mexico) has its own dance form," he said. "Originally the natives would emulate the Spaniards, because they had the Spanish style dance. The natives at the time saw it and they did their own interpretation."

Armando started learning folklorico dancing when he was 33 years old. Although he was intimidated at first to be learning alongside younger students, he stuck with it.

"I had seen a group performing. I liked it, but at that time I thought that's out of my reach," he said. "I told (my teacher) very clearly: if I'm not going to hack it just let me know."

After taking lessons for some time, Armando began teaching, something he enjoyed and was good at.

"I was very fortunate to learn the real dance movements for the particular regions. There's a lot to it," he said. "In Mexico the teachers have doctorates. If you're doing a move too lively, the maestros will stand up and say, 'That's not our region, that's not traditional.'"

After he got married, Armando's wife Elva became involved as well. When the group first started out, about 40 students were involved. Now the group has about six students.

Even though the number of students has declined, the folklorico dancing tradition in Williams spans generations.

"It really makes us feel old when we see some of our children that used to dance 20 years ago bringing their kids now," Elva said. "It's so neat."

In the Padillas' class, the students focus on the dance styles from Jalisco and Veracruz. They practice on Tuesdays and Thursdays from 5:30 to 6:30 in the Williams Rodeo Barn. The dance classes are free and open to all ages and experience levels. Clients from Camp Civitan, which serves children and adults with developmental disabilities, also participate in the classes.

"I try to hopefully have them enjoy themselves," Armando said of his students. "They're all so individual. It's a lot of fun."

And the students agree. Nine-year-old Christine Andrews said she wanted to try folklorico dancing as an alternative to playing sports.

"I didn't want to play softball or anything so I just tried this," she said, adding that she enjoys "the shows and the practices."

"I just saw that they were dancing and I just wanted to dance too," she said. "I like being with my friends."

"It's fun. I love the costume," he said. "Sometimes we perform. We have a good time. That's all that matters. We dance really slow and really fast."

During practice, the girls wear practice skirts. For performances, the girls wear more formal dresses. Padilla receives donations from private individuals and the city of Williams to pay for the skirts the dancers wear. The students also wear special dance shoes.

"As opposed to taps, they have nails," Padilla said of the shoes. "It's to have the sound, and they're not as slippery as taps."

Since the class is mostly girls, the students haven't gotten to learn the dance steps they would normally do with a partner. However, the group has learned how to improvise and do solos with imaginary partners to make it work.

Padilla said although he is the teacher, the students also learn a great deal from each other.

"They help each other out, emulate one another," he said. "They encourage each other. If a student falls, they get up and start again, just keep on going, which is what we teach. We teach them to smile as part of the practice. It makes me smile because they do listen and they do learn."

The dance moves the students learn stick with them for years after they've stopped taking lessons. Elva recalled one of their former students going to a Mexican restaurant in the Valley and hearing a traditional song she knew from folklorico class. Once she recognized the music, she got up and started dancing.

"That's something that they never forget-the basic steps," Elva said. "And when they hear the music it moves them. It's really neat."

"They come in here like little flower buds. They come hiding behind their parent and they don't want to look at you," Elva said. "After a little while when they start dancing, they come out and they start learning to introduce themselves. And here comes this little bud and it opens up. It gives them a lot of confidence and self esteem. That's the reward that we get."

More information about the Williams Folklorico Dancers is available at (928) 380-4637.