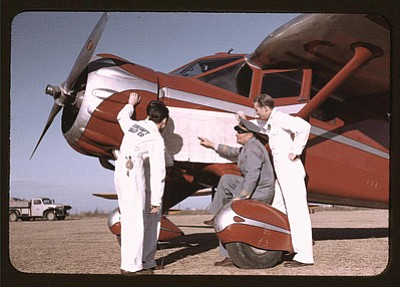 In this photo from 1942 an instructor and student study a map at Meacham Field in Fort Worth Texas. Photo/Library of Congress

WILLIAMS, Ariz. - The Williams airport is set to increase its airplane storage capacity in the coming months with the development of new hangar space.

Williams City Council members approved a bid and contract documents for the construction of 10 T-hangars at H.A. Clark Memorial Field at their March 26 meeting.

The Arizona Department of Transportation (ADOT) has agreed to loan the city $507,625 for the development of the hangars.

When the city first solicited bids of the hangar construction, the bids came back too high. After staff adjusted the project scope, they solicited for bids again and received two competitive responses.

With other project costs such as engineering totaling $37,500, the total cost of the hangar development project will come to $517,078. Although that figure is higher than the city's ADOT loan amount, the $9,453 difference will be covered from other city budget areas.

Hangar rental fees will be used to repay the ADOT loan, according to City Manager Brandon Buchanan.

"We've structured it in a way that actually still maintains a competitive monthly rent with Flagstaff and some of the surrounding airports," he said.

Christiansen said he expects the 10 T-hangars to rent quickly once they are built in the next few months.

"I do get calls monthly for about half of the amount of hangars from people who are seriously interested and wondering when the project is going to begin," Christiansen said, adding that the city has received more than 10 interest forms for the hangars.

Councilman Frank McNelly said he was happy to hear about the level of interest in the project.

"The way that things are projected and penciled out, (the hangars will) pay for themselves after a bit," he said.

Councilman Craig Fritsinger asked how the city would repay the ADOT loan if all 10 T-hangars were not rented as expected. Finance Director Keith Buonocore responded that a 10 percent contingency has been built into the budget that would get the city through one year if the hangars did not all rent.

Currently, H.A. Clark Memorial Field has three usable hangars - one large city-owned hangar that can hold as many as three planes depending on the size and two smaller hangars.

The airport's capital improvement program includes plans to use grant money to remove two old hangars in order to resurface and expand the general aviation apron. This would leave only the large hangar and a shade structure for planes.

City officials hope to increase activity at the Williams airport by adding the 10 new T-hangars.