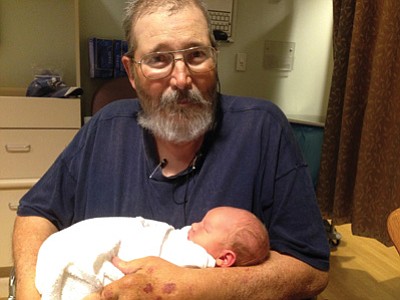 Thomas Dean Morris was born on December 23, 1951, the second son of Lt. Colonel Edward C. Morris and Zelda Faye Morris in Farifield, Iowa. He passed away quietly at home in Williams on September 19, 2014.

Tom grew up all over the United States and Canada at numerous military installations because of his father's work in the Marine Corps. He spent a good part of those years in Escondido, California where he graduated high school from Orange Glen as did his older brother Jerry and his son Anthony.

Tom went to work at 3M Corporation in San Marcos near his home in Escondido working in their Lens Division. There he met his wife Susan Kreppel. They married on August 7, 1982. Soon after they relocated to Boca Raton, Florida where Tom worked as a Purchasing Agent for Florida Flexibles.

Tom and Sue returned to Escondido in 1997 to be near Tom's parents. During a vacation to the Grand Canyon in 2006 they fell in love with the Williams area and after the passing of both of his parents, moved there. Tom made friends easily wherever he went due to his gentle and kind spirit. He was a Ham Radio Operator and loved talking with others from all over the world. He was a great dart player and a real gun enthusiast. He enjoyed going out "plinking" with his friends and learning all he could about different hand guns and rifles. He also loved photography, especially taking pictures of the Grand Canyon.

Tom had a strong faith in God that did not falter, not even during his fight with bone cancer. He knew he would be called home in God's timing and would spend eternity with his Lord and Savior, Jesus Christ. He was a family man that loved his family deeply which included his friends. All friends were his family.

Tom leaves behind his wife Sue, brother Jerry, two sons Chad and Anthony, his grandson Dallas, and numerous nieces, nephews, cousins, aunt, uncles and friends. A Memorial Service will take place Saturday, October 4 at 10 a.m. at Calvary Chapel, 901 S. Ninth St. Williams. In lieu of flowers, the family would like donations to be made to the Shadow Foundation, which helped them and can continue to help other families battling cancer or help the family with burial costs. Donations may be sent to Calvary Chapel Williams designating the funds are for Tom Morris.