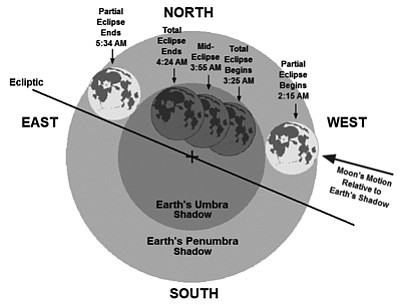 WILLIAMS, Ariz. - Two Eclipses will be visible from Williams in October, one Oct. 8 and one Oct. 23.

In the early morning hours of Oct. 8 the Moon will pass through the northern part of the Earth's umbra shadow in the constellation Pisces, about 1° north-west of the planet Uranus, and easily visible from all of Arizona.

From start to finish, the eclipse will last about 3¼ hours (not including the penumbral phases which are faint and very difficult to see). The partial eclipse begins as the Moon's eastern edge slowly moves into the Earth's umbra shadow. After the ingress first partial phase, totality will be observed for just 59 minutes as the Moon's orbital motion takes it entirely through the Earth's dark umbra shadow.

One of the best things about lunar eclipses is they are completely safe to observe with the naked eye. No special filters are required to protect your eyes like those with solar eclipses. You don't even need a telescope to watch the eclipse, although a good pair of binoculars will help.

An eclipse of the Moon will only take place at Full Moon, and only if the Moon passes through some portion of Earth's shadow. The shadow is actually composed of two cone-shaped parts. The outer shadow, or penumbra, is a zone where Earth blocks some (but not all) of the Sun's rays. In contrast, the inner dark umbra shadow is a region where Earth blocks all direct sunlight from reaching the Moon.

During a total lunar eclipse, the Moon's disk can take on a dramatically colorful appearance from bright orange to blood red and more rarely dark brown due to the amount of light that is refracted through Earth's atmosphere.

On the 23rd the Sun and Moon offer us a twofer with this second celestial event as the Moon passes in front of the Sun casting its shadow across much of western North America. The First Partial Phase begins at 2:19 PM, with Mid-Eclipse taking place at 3:36 PM, and ending at 4:45 PM. Nowhere on Earth will anyone view a Total Eclipse as the central lunar shadow passes above our planet.

A Partial Solar Eclipse observing session will take place in the afternoon at Glassburn Park from 2 p.m. to 5 p.m. Oct. 23. Members of the Coconino Astronomical Society will have telescopes with special safe solar filters available to view the eclipse event.

The first thing to be said is never, ever observe the sun either directly with the eye, or especially through a telescope or binoculars as you will blind yourself. You can safely form an image by poking a small hole in a section of cardboard and projecting the partial crescent phases of the Sun onto a piece of white paper. The solar image can also be projected onto a white screen with binoculars or a small telescope. Aluminized Mylar direct viewers are sometimes available as well.

Members of the Coconino Astronomical Society, in conjunction with the City of Williams, will host a Star Gazing Party from 7:30-9:30 p.m. on Friday at Glassburn Park, in the natural area west of Rod's Steakhouse. Several telescopes will be on hand to view the moon, planets and other celestial objects. Organizers recommend bringing a folding chair, or blanket, and your own binoculars.