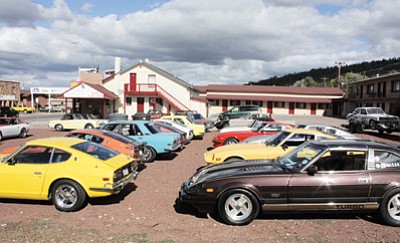 WILLIAMS, Ariz. - This weekend, about 75 historic Datsuns of all types will roll into Williams for the fourth annual Multi-State Datsun Classic.

"When it comes down to vintage Japanese cars, you see more Datsuns being driven on a regular basis than you do any other Japanese vintage car," said event organizer Chris Breyer. "They're very bulletproof, they're very appealing, they're pretty simple to work on. And they're a hell of a lot of fun."

On Oct. 3, the group will have a meet and greet at Doc Holliday's Steakhouse. On Oct. 4, a car show will take place with parking starting at 9 a.m.

Afterwards, an awards ceremony will take place at 3 p.m. First through third place awards will be given out in seven categories, as well as a Best of Show award.

The car show will take place near Dairy Queen at 603 Historic Route 66.

"Everybody loves being there and using that as part of the backdrop because it's nostalgic," Breyer said.

After the awards ceremony, at about 4 or 4:30 p.m., the event's first ever parade will start at Dairy Queen. The parade will continue along Route 66 and end under the Gateway to the Grand Canyon arch on the east side of town, where the drivers will pose for a photo.

"We'd love to have a lot of people turn out for that," Breyer said of the parade. "They will see cars that they haven't seen before."

The Multi-State Datsun Classic started in 2010 when the Southern California Datsun Roadster Owners Club decided to have a gathering in Williams where a few members lived.

"The word got out that some Datsun people were meeting in Williams, and the word spread like wildfire," Breyer said. "Everybody asked, 'Can you just make this an annual event?'"

About 47 cars participated in the first event. Since then, the gathering has continued to grow, and the club is now preparing for next year's five-year anniversary.

The Datsun Classic is open to all Datsuns that are 1985 or older, and people can register at the event. Car owners will come to Williams from around Arizona, Washington, Florida, Texas, California, Nevada, New Mexico, Colorado and Mexico.

Besides serving as a gathering for Datsun enthusiasts, the event is also a fundraiser for Camp Reach for the Sky, a camp for children with cancer.

"People love the venue, they love the town, they love the setting all around Route 66, the people are so welcoming to us, they make us feel like we belong there," Breyer said. "We feel like Williams is a second home."

Williams-Grand Canyon Chamber of Commerce Events Coordinator Darlene Bitter said the Datsun Classic is a positive event for the town.

"I think people are taking notice of Williams as being a place to go, especially since it has Route 66 going right down the middle of it, for a car show," she said. "The town itself is very photogenic and putting a classic car in front of an old building is just a really awesome photographic opportunity."