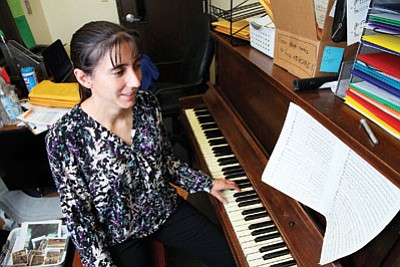 Williams Unified School District music teacher Beverly Stearns takes a break at the piano in her office. Stearns is hoping to revive the district’s music program by challenging her students. Ryan Williams/WGCN

WILLIAMS, Ariz. - After about five years without a music program, Williams Unified School District (WUSD) brought back the program last year. Now in its second year, new K-12 music teacher Beverly Stearns is ready to rebuild the program by showing students their potential.

"My philosophy is to improve every day, so as long as we are making forward progress, that's what we're looking for," she said. "Hopefully kids won't feel like I ever criticize them. I will correct them, but not demean them."

Stearns graduated from Northern Arizona University with a bachelor's degree in music education. Before she started working with WUSD, Stearns was teaching at a preschool and giving private lessons.

Now that she's running a K-12 program, Stearns has some big ideas for how to get the program off the ground. At the middle school level, Stearns is already looking to prepare the students for high school.

"The best thing about having a K-12 program is that I know where I want them to be, and I can push them to get there, and I can't blame anybody else if they're not there," she said.

For example, Stearns is working on challenging the eighth grade band class to play music they didn't know they were capable of playing.

"I'm pushing their class into music (where) they don't know those notes," she said. "They didn't know you could play that on a trumpet. 'You can't go that high.' 'Yes you can. Try.' So I'm pushing them to be ready for high school music next year so we can have a stronger group and hopefully recruit more members, because the better we are the more we're going to recruit."

At the high school level, Stearns allows the students to choose a lot of the music they play, because "if they enjoy playing it they're more likely to practice."

The high school students are also part of a pep band that plays at sporting events to rally the fans. The group made its debut at the first home football game Sept. 5.

"We went out and we did it and the kids were nervous and I was nervous but we did it," she said. "They really saw that we can do this."

For the next home football game this Friday, the band is looking forward to playing several new songs and cadences that members have learned since the last game.

In addition to the instruction she gives during regular class time, Stearns is available for private lessons before and after school. The students who come receive extra credit.

"It also helps them because I can get much more done in 15 minutes with one kid than I can in the whole band," she said. "We've had so many breakthroughs with being able to go over the break for the clarinet, with being able to start playing notes, with 'Oh my gosh, that's what that sounds like.'"

With just over 20 students each in both the middle school and high school levels, the program is small this year. However, Stearns hopes that the program will continue to grow.

"My goal for down here is to make music important, to show kids that they don't have to just do sports," she said. "There are other outlets out there for them to express themselves and to grow and to learn and to develop."