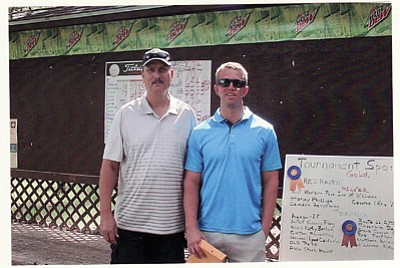 The tournament was a two-person scramble format. Claiming first place gross (raw score without handicap) for the second year in a row were Stan and John Kobierowski. Winning first place net (with handicap) were Chance Bixler and Bert Mead. Second place net went to Cesareo Vasquez and Phillip Echeverria.

Closest to the pin challenges took place on each of the golf course's par three holes. Stan Kobieroski claimed the prize on hole three, Mark Marquez won on hole 12, Cruz Mortinson won on hole 14, and Tyson Smith won on hole 18. No one won the $50,000 hole in one challenge.

During the past year, FWAC increased advertising and promotion of the pool and put on free swim parties to encourage pool use. The pool saw a significant increase in attendance this past summer, and FWAC hopes to encourage the city to extend the length of the season in 2015. FWAC is a 501c3 public charity and tax-deductible donations are available year round.