Dogtown I Well still down, hope running out on revival
City staff to use hydraulic pressure as possible last ditch effort to get well back online 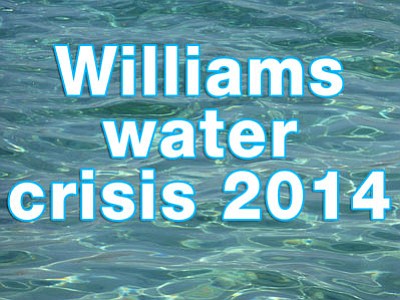 WILLIAMS, Ariz. - Nearly four months after Dogtown 1 Well failed for unknown reasons, the city of Williams is running out of options to revive it.

The Williams City Council directed city staff to move forward with its next to the last possibility for salvaging the well-using hydraulic pressure to remove the stuck equipment-at its Sept. 11 meeting.

Before the well failed on May 19, it was producing about 250 gallons per minute. After several previous unsuccessful attempts to remove the column pipe from the well using cranes, workers sent charges down into the well in late July to help separate the pipe. The workers were able to remove all but about 30 feet of column pipe and the pump from the hole.

About two weeks ago, workers sent 110 gallons of acid into the hole and used a specialized tool, which Public Works Director Kyle Christiansen compared to a metal pipe cleaner, to clean up the pipe.

"The idea was to open up the tuberculated portions of the perforated case, which is where we get the water to infiltrate into the well," Christiansen said.

After that the city completed a test to see how much water the well was producing above where the previous pump had been located. They found the well to be producing 10 gallons per minute.

Workers then sent a camera down and found the perforations were clean but not open. At this point workers increased the amount of acid they sent down into the well and repeated the cleaning process, but found the well was still producing 10 gallons per minute. Officials believe the stuck pump is blocking the majority of the water the well had previously been producing.

The next step to fixing the well is what City Manager Brandon Buchanan referred to as "going fishing." This week, workers will use specialized equipment to apply hydraulic pressure to free the stuck pump in the hole. The contractors completing the work are from the oil field industry, and will be able to apply more than double the amount of pressure on the stuck equipment than the amount that was originally applied when the well first failed. The process is expected to cost about $25,000 per day and take about a week and a half, bringing the total cost estimate to about $210,000.

"So really at this point that would put us probably over that threshold, and that threshold is a moving target all the time, of how much money we're going to continue to be willing to spend on that hole," Buchanan said. "To me, this (fishing) is our last shot on this hole."

Councilman Lee Payne expressed some doubt about moving forward with the fishing process.

"I'm starting to teeter on the thought of if we go sink another $250,000 to jostle that pump, what does that buy us? At this point in my mind we're starting to teeter on if we're going to drill, let's drill," he said. "Obviously this is our second or third attempt at reviving this well. It's starting to get astronomical. We could drill another well with what we're about to put into this one hole."

Councilman Bernie Hiemenz responded by saying, "I know what you're saying but we know the water is in this one. It's not dry."

Pat Carpenter of A Quality Water Company added that if the contracted company is successful in fishing out the stuck equipment, he believes the well will be viable again.

"The successful part of fishing the equipment out is what would make me nervous. They told Brandon that they're pretty sure that they can get it out. But being pretty sure and getting it out are two different things," he said. "I think the water is definitely still there. I just think right now it's being restricted by whatever happened down the hole."

Buchanan agreed that there was no guarantee that the process would work.