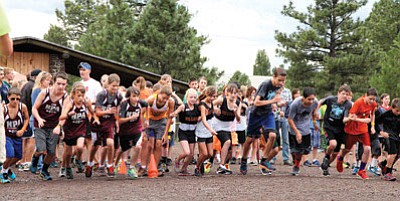 WILLIAMS, Ariz. - Now in its second year, the cross country program at Williams Middle School kicked off last week with a meet at Buffalo Park in Flagstaff.

On Aug. 27 the 14 Williams runners broke up into teams of four to complete a four-mile relay race.

At the end of the relay, one of the Williams teams finished in 13th place.

"It was a little bit tough, but at the end I started getting used to the running," she said.

She added that competing in the first meet of the season taught her "to not speed up as quick, to not run as fast as you can at first, just pace yourself."

Eighth grade runner RJ Giunta took away a similar lesson from his first race: "To better pace yourself and then when you get to that last loop just run."

Giunta said the team's practices prepared them for the meet.

"We've just been running more and more each day, and our progress has gone through the roof," he said.

The team started practicing Aug. 18. The students started off running a mile and a half, and this week they'll increase that distance to two miles in preparation for some upcoming two and a half mile races.

"The kids have shown incredible enthusiasm," Schober said. "(Last) week was the first week that they said, 'It hurts. Do we have to run again Mrs. Schober?'"

Schober said cross country is a fun sport because anyone can participate.

"You don't just have a group of 12 kids out there competing," she said. "You have as many kids as want to run."

Last week's meet was the only competition that involved relays.

"This is a fun way to get the season kicked off, like let's be a team, let's do a mile relay, let's get them competitive a little bit," Schober said. "But then when we come here next time it will be individuals."

Shober hopes to have a few runners qualify for the state competition in Anthem in October. The team's next meet is Sept. 19 at Buffalo Park.

On the high school team, the cross country program has six runners. This team runs three and a half mile long races.

"They're impressive," Schober said. "They've only practiced for a week, but it will be another week before I have a really good feel for where we're going to go with them. But they're really positive, and that alone will get them far."

The high school team's first meet is to be announced.