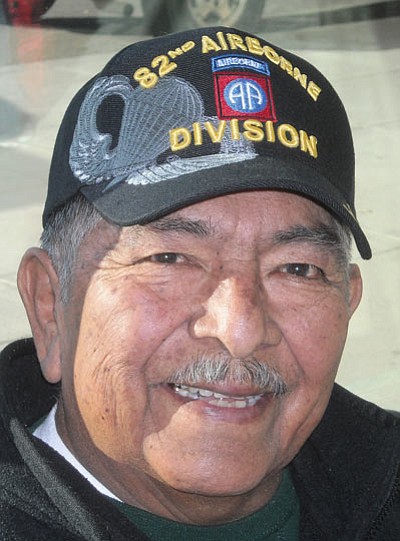 "A life well lived." "A life of service to others." "A man with no enemy." The family hears these words again and again as the tributes pour in for him.

Kenneth George Talakte was born at his grandmother's house at old Oraibi on September 27, 1939. His parents, Kenneth George Talakte Sr. and Dorothy Honanie Talakte, lived at the employee village at the Grand Canyon where his father ran the Babbit's grocery store and his mother lovingly raised and nurtured ten children.

He attended school in Williams, Arizona and at the Grand Canyon. He graduated from Grand Canyon High school in l959. After graduation he worked as a meat cutter for Babbits.

He enlisted in the United States Army and graduated from jump school at Ft. Bragg as a proud member of the 82nd Airborne Rangers, 307 Engineers. After graduation Sgt. Talakte taught at the Ranger Jump School at Ft. Bragg.

He married the beautiful girl he had adored since the age of six, Linda Kewanimptewa, and together they raised three wonderful girls.

Ken joined the Arizona Highway Patrol in 1973 at the insistence of Geo. McGuire and was stationed first at Seligman, Arizona and then at his permanent duty station in Williams where he built their home with his own two hands. He served the citizens of Arizona proudly for twenty years as a Master Patrolman.

He was frequently called off the road to teach, first at ALETA (Arizona Law Enforcement Academy) and then at Yavapai Community College where he taught EMT classes. He was also an accident reconstruction expert and was called to many emergency situations as he spoke four languages.

His work with the American Legion included being elected Commander of John Ivens Post 42, Grand Canyon for five years. One of his many duties was transporting veterans to their various medical appointments in Flagstaff and Phoenix. Being appointed to the Homeland and National Security Commission was a great honor. After moving to Montana he was also privileged to be in the company of Andrew Pearson Post 117 of the American Legion.

He also loved bowling with the "gang" in Williams and Flagstaff and was offered sponsorship to bowl professionally.

An expert marksman, he loved hunting. His trips to Alaska with Ed and Dave were memorable. No one will ever forget the "Drizzle Y" or the lost camp! He always came home with fabulous tales of his adventures.

Fishing was so much fun for Ken as he taught the grandchildren the "Hopi way" to catch fish. He did not put a pole in the water for many years as he went from child to child, untangling lines, re-baiting hooks and pulling kiddos out of the water.

His sense of humor is legend, his compassion boundless, his dignity quiet and his love of family and friends was his joy.

He was predeceased by his parents, brothers, Virgil and Melvin, sisters Mathelin and Tanya, his son-in-law Chris and his beloved wife, Linda.

A memorial will also take place at the Shrine of Ages, Grand Canyon, on September 6 at 11 a.m. with a reception following at the Canyon Plaza Resort in Tusayan, Arizona. Those wishing to attend should mention at the park entry that they are attending the funeral and the entry fee will be waived by the Park Service.

In lieu of flowers, the family requests any donations to be sent to the House of John Hospice 14 Spring Street, Clifton Springs, NY 14432 or the charity of your choice.

Memories and condolences may be shared with the family at www.dahlfuneralchapel.com