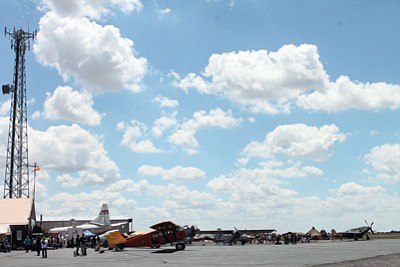 The public enjoy themselves with ongoing activities throughout the day at the 10th Annual Thunder over the Coconino X Fly-In, starting with watching different aircraft take off and circle the Valle airport. Loretta Yerian/WGCN<br /><br /><!-- 1upcrlf2 -->

VALLE, Ariz. - It turned out to be a perfect day for a Fly-In at the Valle Airport on Aug. 23.

"It's a good day," said Norm Gobeil, president of the Valle Airport, "An event like this is all weather dependent, last year it was raining everywhere but Valle. At 10:30 a.m. this morning we had room for only two more planes. We have filled up our parking lot."

The 10th annual Thunder Over the Coconino X, Fly-In kept the attention of all who attended. Participation for the public and presentation of the aircraft and cars were one of this year's biggest attractions for the public. John Siebold, owner of Valle Airport, puts the event on every year. Valle Airport works alongside the Planes of Fame Museum and the Flagstaff Experimental Aircraft Association (EAA) Chapter 856 from Flagstaff and Air West Helicopter to provide a day of excitement and entertainment for all in attendance.

The day started with a pancake breakfast put on by local Boy Scout troops. The fly-in started at 8 a.m. and lasted until 3 p.m. Food vendors and local artisans participated in the day's festivities.

The public was able to enjoy themselves with ongoing activities throughout the day starting with watching different aircraft take off and circle the airport. Homemade models, war bird era and antique airplanes were just a few of those featured at the show. All the airplanes were available for people to take pictures of, and the Planes of Fame Museum opened its doors to allow everyone a chance to tour its hangers. The museum, a branch of the Planes of Fame Museum located in Chino, California first opened its doors in 1957 and is one of the oldest and largest flying museums in the country.

"Preserving history is our big thing," said Museum Director Robert Reed. "We want to take it from the community and put it on display. It is important to be a part of the community. Today we are supporting the fly-in."

The fly-in drew many local people as well as people from all over the country and even from Canada.

"We had about 17 people pre-pay, from our website, for rides in the Ford Tri-Motor," Gobeil said. "It's from 1929, Henry Ford built 199 and there are five, maybe six left flying in the world."

Rides in the Ford Tri-Motor were offered all day, as well as Helicopter rides from Air West Helicopters. Young Eagle Flights, part of the Flagstaff EAA chapter 856, also offered free rides to kids (ages 8-17) as part of their services.

"They give them a free flight and teach them about the airplane and have the pilot explain everything to them," said Gobeil. "They'll fly a kid for free to get young people interested. It's a good organization and the owner of the airport, John Siebold, is very interested in young people being interested in aviation. "

The fly-in featured guest speaker George Marrett who flew 188 combat missions in Vietnam to rescue Americans during the Vietnam War. He spoke about the missions he flew and was available to sign his book "Cheating Death."

Representing the legacy of the first African American Pilots, were the Tuskegee Airmen from the Phoenix, Arizona Chapter. Tuskegee Airman Robert Ashby was a guest at the fly-in in 2012 and was excited to be back.

"We determined we need to impart what we learned and we have started mentoring young people and teaching them about various careers available in the airline industry," Ashby said.

Ashby was a night bomber pilot during the Korean War and attended the Tuskegee Institute in Tuskegee, Alabama. Ashby retired from aviation and now speaks at schools and colleges and even visited Balard Airbase in Iraq in 2005 to encourage U.S. troops.

Another visitor not to be missed was Ken Johnston. Johnston was a Solar System Ambassador for the NASA space program for five years and now holds a one way ticket to Mars.

At 71 years old, Johnston is the oldest person chosen by Mars One, a private corporation out of the Netherlands, to land on Mars in the year 2025. Starting next year, Johnston and other chosen team members will begin a 10-year training program to prepare for the trip. The launch date is set for September 2024 and after a 7.5 month journey, will land on the planet Mars.