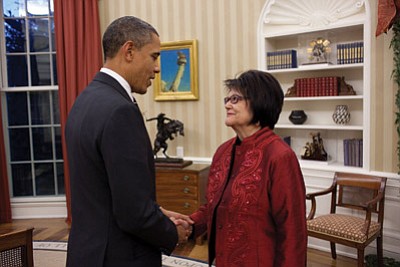 President Barack Obama in the Oval Office in 2010 with Elouise Cobell, the lead plaintiff in class-action lawsuit against the federal government for mismanagement of Indian trusts. It was settled in 2012 for $3.4 billion. Pete Souza/The White House

WASHINGTON - On a campaign visit to the Crow Nation in Montana in 2008, then-Sen. Barack Obama promised to improve nation-to-nation relationships as president, vowing that Native Americans would "be on my mind every day that I'm in the White House."

It may not have been every day, but after six years the administration is getting generally high marks from tribal experts who say the president has given tribal relations a high profile. It comes at a time when landmark legislation for Native Americans has passed.

Gains range from an overhaul of tribal courts to a multibillion-dollar settlement of a longstanding tribal suit against the government, but include lighter policy statements like the declaration of National Native American Heritage Month and presidential visits to reservations.

"I certainly feel the commitment from the administration has been one of the strongest we've seen among a number of different administrations," said Eric Stegman, a former Senate Indian Affairs Committee counsel.

Not all the successes can be credited solely to the Obama administration - many had already been in the works for years before he took office, but his timing was right.

"A stack of policy was waiting for him when he walked through the door," said John Dossett, general counsel with the National Congress of American Indians. "The Obama administration has benefited from that."

Dossett appreciates what Obama has done since taking office, but said some of the policies of the past six years were being developed during President George W. Bush's time in office.

"Even though there weren't a lot of accomplishments, they were interested in trying to work with tribes and talk with tribes," Dossett said of the Bush administration.

The Obama administration's actions began with his campaign pledge to treat native nations as sovereigns: The year he took office, for example, Obama began what would become annual White House Tribal Nations Conferences.

It was at the third conference in 2011 that he said the U.S. had reached a "turning point" in nation-to-nation relationships and tribal development.

"This was the moment we began to build a strong middle class in Indian Country," Obama said at the 2011 conference. "One that honors old traditions and welcomes every Native American into the American Dream."

In June, the Obamas visited the Standing Rock Reservation in North Dakota, becoming the first sitting president to visit Indian Country since Bill Clinton did so in 2000.

Not all the advances have been ceremonial.

Stegman points to the reauthorization of the Indian Health Care Improvement Act as the "single biggest thing" the administration has done, since it allowed for Medicaid expansion and improved access to healthcare for Native Americans.

It was under Obama's watch that the Violence Against Women Reauthorization Act of 2013 passed - with a provision to improve safety for Native women on tribal lands - and the HEARTH Act, which gives tribes greater leeway for surface leasing on their lands.

European travelers in particular, she noted, "have an affinity for Native American culture." But Rupert, the association board's president, said the administration needs to provide Indian Country with funding and technical and trade assistance if tribes are to capitalize on the tourism push.

The sense that there is more to be done, despite recent gains, echoed throughout discussions on the administration's record.

The Census Bureau said 28.4 percent of Alaska Natives and American Indians lived in poverty in 2010 and 29.2 percent lacked health insurance - close to double the national averages of 15.9 percent in poverty and 14.8 percent without health coverage.

Dossett said the recent gains have addressed problems of the past and that now it's time for the federal government to "fix the system" moving forward.

But Stegman said there could be no moving forward without addressing long-standing issues like public safety and healthcare, two issues "we've needed addressed for a long time."

"These are big steps forward for tribal communities," Stegman said.

Stegman, who now works at the Center for American Progress, said one way the administration could keep moving ahead is by funding efforts in Indian Country to help with comprehensive education reauthorization, language programs, housing and economic development.

"If we don't have the proper funding, we won't see the needed reforms," he said. "Implementation will only be as good as the funding that comes with it."

Stegman said progress of the last six years has created a good partnership between tribes and the administration. He praised Obama's efforts and said there is "something genuine that can be said" about his first visit to Indian Country.

Dossett said the proof of that relationship can be seen in tribes' new willingness to work with Washington.

"I think it's certainly true that this administration has already demonstrated that they are ready to work with tribes on a dozen or more issues," he said. "Tribes are coming forward and think it's worth their time and effort because they have somebody willing to listen to them."