Park and Forest Service plan for fall and winter burning 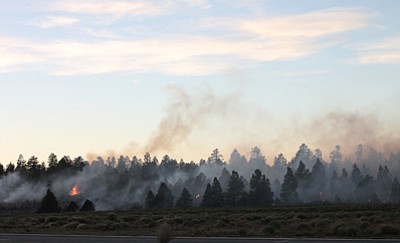 GRAND CANYON, Ariz. - National Park Service and U.S. Forest Service fire managers are working together as they anticipate the ignition of prescribed fire treatments during the fall and winter months as the weather permits.

The North Rim Slopes Rx burn unit is located on the south facing slopes west of Highway 67 and the entrance station and east of W-4 road and north of the Basin.

This burn unit is approximately 22,040 acres in size and will be treated in a multi-year implementation plan. The number of acres treated varies year to year. The Slopes Rx include previously untreated areas and areas that have experienced fires recently.

Objectives of the Slopes Rx include reducing hazardous fuels, returning fire to a fire-adapted ecosystem, and aiding in protecting and enhancing Mexican Spotted Owl habitat.

The Bright Angel Rx burn unit is within the developed area on the North Rim and is 426 acres in size.

Fire managers identified five units in the 426 acres that will be treated. One unit of approximately 9 acres may be treated this fall near the North Rim Campground.

Objectives for the Bright Angel Rx include improving the defensible space in the Wildland/Urban Interface in the North Rim's developed area. The burn reduces hazard fuels adjacent to structures and helps decrease the threat of unwanted fires.

Fire managers are also preparing to burn piles of wood debris on the North Rim, weather permitting. The piles are located in the Point Sublime area on the W4 road consisting primarily of small diameter tree trunks, small branches, twigs and needles.

Smoke from the prescribed fires will be most visible during when the fires are lit and will gradually diminish. Smoke may be visible along Highway 67 and 89A and from various locations on the North Rim and South Rim. Smoke is expected in the canyon, one to three days after each ignition related to the Slopes Rx.

Fire managers are working with the Arizona Department of Environmental Quality-Smoke Management Division to reduce and mitigate the potential impacts from the smoke.

Visitors to the Canyon may see fire personnel, vehicles, and air support in the vicinity while prescribed fires are being implemented. Please drive slowly, turn your lights on, and avoid stopping in areas where fire personnel are working.

Plans for each burn unit contain sets of parameters defining the desired weather and fuel conditions under which a prescribed fire can be initiated. Prior to implementing the burns, fire managers evaluate current conditions and only begin burning if the prescribed conditions are within those parameters.

Ignition of any of these prescribed fires is announced via Twitter @GrandCanyonNPS and on the park's website http://www.nps.gov/grca/parkmgmt/firemanagement.htm. Status on any initiated prescribed fires can be tracked on InciWeb at http://inciweb.nwcg.gov/. You may also contact Grand Canyon Public Affairs Specialist Kirby-Lynn Shedlowski at 928-638-7958.