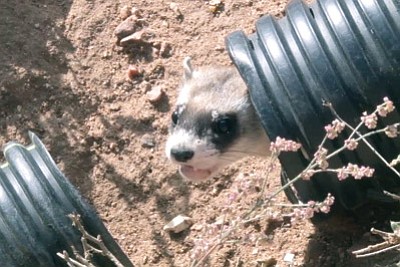 A black-footed ferret is released on a ranch in northern Arizona that will serve as the second reintroduction site for the species in the state. Photo/Kayla Wall

WILLIAMS, Ariz. - With the door to its cage open, a black-footed ferret poked its head out briefly before darting into a manmade burrow set up amid scrub brush. Not far away, five other ferrets did the same thing as wildlife officials and reporters looked on.

Having disappeared from the area in the 1930s due primarily to the decline of prairie dogs, its meal of choice, the black-footed ferret has been making a comeback in northern Arizona since a reintroduction program began in 1996.

Wednesday's releases marked a new stage of that effort as state officials established a second population to complement one to the west near Seligman.

"No question the black-footed ferret is an epic conservation success story," Larry Voyles, director of the Arizona Game and Fish Department, said at a news conference marking the release.

The new site is within Espee Ranch, owned by Babbitt Ranches. The area 40 miles northwest of Williams is sprawling grassland with a thriving population of prairie dogs.

In addition to the ferrets released with reporters and officials witnessing, Game and Fish released another 19 at the site Oct. 1.

"This is many years in the making," said Lynda Lambert, a Game and Fish spokeswoman. "It's been since 2007 that we've been talking about getting the ferrets back out here, to do the surveys necessary to determine where the ferrets are going to come from and how many need to be released."

Other organizations collaborating on the release included the U.S. Fish and Wildlife Service, U.S. Geological Survey, U.S. Department of Agriculture and Hualapai Nation.

Once ranging from Mexico across much of the Intermountain West and into Canada, the black-footed ferret was believed extinct due to disease and loss of habitat until a rancher's dog killed one in Wyoming in 1981. That led to the discovery of a colony of around 120 ferrets in that state.

"It's just pure luck that we have ferrets today," said Jennifer Cordova, a Game and Fish wildlife specialist on the ferret project.

When the Wyoming colony dwindled to 18 ferrets in 1985 due to disease, the federal government decided to begin a captive-breeding program.

"All the ferrets we have in the wild today basically came from 18 animals," Cordova said.

"The goal is to have a self-sustaining population and eventually get them taken off the Endangered Species List," she said.

The reintroduction site at Espee Ranch, a working cattle ranch, was established under a provision of the Endangered Species Act called a Safe Harbor Agreement, which allows landowners to have endangered species on their property without many of the land-use restrictions the act requires.

The ferrets still face risks. Cordova said that the ferrets need a thriving prairie dog population to survive, as the rodents comprise around 90 percent of their diet.

Both prairie dogs and ferrets are susceptible to disease. Researchers from the U.S. Geological Survey unveiled a vaccine for sylvatic plague that they said would help sustain both populations.

Bill Van Pelt, grasslands coordinator of Western Association of Fish and Wildlife Agencies, called the event one more step in the black-footed ferret's road to recovery.

"Today, I just see this as one more piece in a jigsaw puzzle that's still coming together," he said.