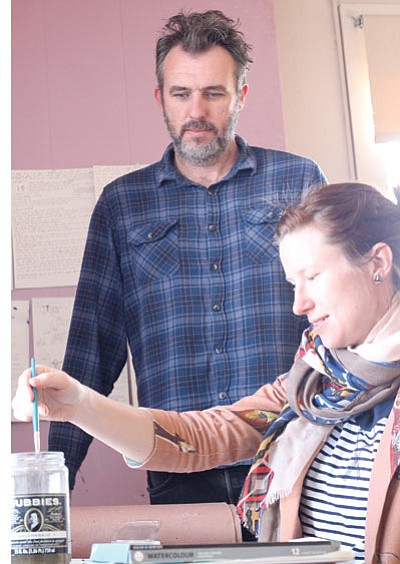 GRAND CANYON, Ariz. - Art with a life of its own is what Marieka Walsh and her husband Kurt Sorensen create. Both artists have a unique form of storytelling that they use to bring life to their projects.

One is a sand animator and the other is a film photographer. They traveled together from Australia to the U.S. to share their talents and gather research for future projects.

Walsh and Sorensen put their applications for the South Rim Artist in Residence program in over two years ago. They applied separately in the hope that one would be accepted to the prestigious residency. Early 2013 found both of them accepted to the program and work began immediately in preparation for their trip.

"We really wanted to do a residency in America and we found this one online," Walsh said. "We saw this residency and this is the one we wanted to apply for. We asked a few questions and we got like a two page email from Rene (Westbrook, former program coordinator for the artist in residency program). We were so excited when we got it. We couldn't believe it."

Walsh and Sorensen originally planned a three week residency, but after finding out Walsh was pregnant, they found there were flight restrictions for pregnant women flying internationally and decided to change the residency to 10 days. Walsh, now five months pregnant, said they planned it so there would be no complications with their travel plans home.

"It would have been okay getting here," Walsh said, "but getting back to Australia could have been a problem. We are playing it safe."

Even with a short residency, Walsh and Sorensen have been able to share their art-forms with people at the Canyon, including visiting classrooms at Grand Canyon School and giving a slide show presentation for the Grand Canyon Rotary.

Walsh first worked in video art and made short films before she began work as a sand animator. As a sand animator, Walsh works in an airtight room where she manipulates sand into intricate layers to create still pictures that are compiled to create a series of pictures which are then transcribed into short films. Walsh uses paintbrushes and wires among other objects to carefully create the pictures she wants for each image.

"I work with paint brushes a lot and do very detailed animation," Walsh said. "It's very time consuming, I can make about one second of animation throughout the course of a day. It's a long day, I usually try to do eight hours a day but if it's a tight turnaround, I'll do up to 14 hours."

Walsh, who also paints and uses watercolors in her artwork, is inspired by the landscapes in and around the Canyon. Her time at the Canyon has been spent working on an idea that she wanted to do based on a children's book.

"It's a children's book idea that I've had for a long time," Walsh said. "I had the idea, but I didn't have the story. Since I've been here and been in this landscape and had the inspiration, I've sort of found the story out of that."

In 2012 Walsh won Best Short Animation at the Australia Academy of Cinema and Television Arts (AACTA) awards for her film 'The Hunter,' which was also featured in over 50 international film festivals. Walsh's animations were used recently in the introduction for the Australian film 'The Turning.' The recognition she has received for her animations has opened doors for many other sand animation projects. She presently works from home and teaches animation several days a week at the University of Technology in Sydney, Australia.

Walsh's husband, Kurt Sorensen captures landscape photographs through the lens of his film cameras. Interested in Australia's criminal history, Sorensen uses newspaper and photo archives and diaries to research historical mishaps. After researching the area where the event occurred, Sorensen photographs the landscapes. He prefers to photograph the area at the same time of day the event happened. Sorensen said he likes to try to capture the intrigue surrounding the event by using natural lighting.

"So if someone went missing at such and such time in the morning I'll go at that time," Sorensen said. "The images are generally taken at the time of day that it supposedly happened."

Sorensen initially planned to do some work surrounding Lake Powell, but after reading more about the Colorado River he was drawn to the mysterious events surrounding the lives of Glen and Bessie Hyde. Sorensen's research has already sent him into the depths of the Grand Canyon to hike and photograph the Colorado River and Bright Angel Trail.

"I started reading more and more about the river and from what I've been doing historically, (the Hyde's) story really grabbed me," Sorensen said. "Two people, adventurous, young and probably not prepared for what they were about to do and subsequently, they really weren't. What really interested me was the fact that they found the boat floating with all their stuff still in it and not them. That mystery, well, I had to do photos after I read that."

Sorensen said one thing that he found especially fascinating about the Hyde's disappearance was the book of poetry Bessie wrote that was found on the boat. Sorensen said Bessie's last poem talking about her doll falling into the water, drowning and heading to the ocean is very mysterious to him.

"It is pretty strange and addictive to me," Sorensen said.

Walsh and Sorensen are heading to Istanbul, Turkey next, where Sorensen is pursuing a piece of Australian history on the battlefield of Gallipoli.