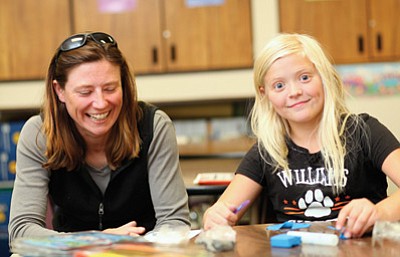 Liz Lane (left) and Ashley Alexander spend some time together with crafts during School Based Mentoring time at Williams Elementary-Middle School. The Big Brother Big Sister program meets on Thursdays at the school. Ryan Williams/WGCN

WILLIAMS, Ariz. - For a small group of Williams Elementary School students, Thursdays are special days that some of them look forward to all week. That's because Thursdays are when the kids meet with their Big Brothers and Big Sisters as part of the School Based Mentoring program (SBM).

The Big Brothers Big Sisters program matches children in first through fifth grade, known as Littles, with positive adult mentors, known as Bigs. The matches start out their weekly meetings as a group to share a snack and do an activity such as working on an art project, doing a scavenger hunt, hearing a guest speaker, or doing kids yoga.

Then the matches have one on one time together, during which they can do homework, play a board game, or play on the playground. It doesn't matter what activities the matches do together, according to School Based Mentoring Program Coordinator Laurel Clohessy.

"The friendship is most important," she said. "A mentor is not a parent or a disciplinarian, they're a friend and a positive role model."

The SBM program has been in Williams for more than 10 years. The idea came from some retired teachers in Flagstaff. After the success of the pilot program at South Beaver Elementary, they decided to expand it.

"I talk to the kids and the teachers and the parents and they say, 'Oh my gosh, every Thursday she picks out a special outfit to wear because she's going to see her Big Sister today,'" she said. "Or I've seen some of these kids run up to me just to do a follow up and talk about their match and they're so excited about it."

Teachers, school counselors or parents can all refer students to participate in the program.

Clohessy added that being referred to the program is not a negative thing.

"It's a good thing if their child got referred and it's a fun thing to do and just a great a benefit for kids socially, academically, and emotionally," she said.

Clohessy has seen students benefit from the program in many ways, including becoming more mature, using better manners, thinking about different career options, and dealing with negative situations such as bullies or academic struggles in more positive ways.

"I've quietly listened as their Big talks to them about it or they listen as the child talks about it," she said. "And then later when the child has to go talk to mom or dad or go back to school and talk to the other kid, it's just this new sense of self advocacy that the child might have, or that someone cares about me."

Anyone older than 16 can be a School Based Mentor. In the past some Williams High School students have served as mentors.

"It doesn't matter how old you are, no matter what interest you have, it doesn't really matter how much experience you've had with children, you just need to be willing to give a little bit of time and attention each week," Clohessy said.

Volunteers go through an interview process, background check and orientation session before becoming a School Based Mentor. In addition, Clohessy checks in with volunteers on a monthly basis to make sure everything is going well with their Littles.

Williams Big Neil Weintraub said he and his Little RJ VanWinkle get along great. This year is the second year they have been matched together. One of the activities they like to do together is play with rocket balloons.

For VanWinkle, his favorite part about being in the SBM program is, "That we get to have fun together all the time. (Neil) is awesome."

Weintraub also enjoys spending time with VanWinkle, and has been a Big Brother for more than 10 years.

"It's been a great program and I've had a lot of different kids over the years and it's kind of cool to see them when they get older," he said. "A lot of the folks that are doing the mentoring right now we work together over at the Forest Service, so a lot of days we're like, 'We can't wait to get there.'"

The Williams program currently has six matches, but Clohessy would like to see that number grow.

"It's a thing that will just elevate your child to feel their best," she said. "We've just got some great mentors, and it's just a fun group," she said. "They get really bonded together."

Those interested in getting involved with the School Based Mentoring program should contact Clohessy at (928) 774-0649 or laurel@bbbsf.com.