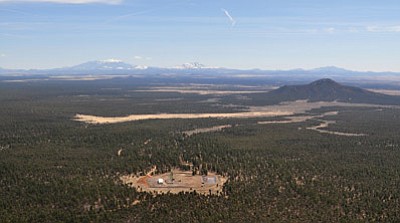 The Canyon Mine in the Kaibab National Forest south of the Grand Canyon, opened in the 1980s, is shown from the air. Photo/Tara Alatorre

PHOENIX - A federal judge Tuesday, Sept. 30, upheld the U.S. Department of the Interior's (DOI) 20-year ban on new uranium mines on 1 million acres near the Grand Canyon, rejecting a challenge by a coalition of mining industry groups.

The consolidated lawsuit, which had as a lead plaintiff Gregory Yount, manager of the Northern Arizona Uranium Project, alleged that the federal government acted improperly when it imposed the ban in 2012. Among other claims, Yount said then-Secretary of the Interior Ken Salazar improperly favored Native American claims that the land was sacred.

Salazar said at the time that the ban was needed to protect water and wildlife around Grand Canyon National Park. The land in question is in the Kaibab National Forest north and south of the canyon.

The ruling by U.S. District Judge David Campbell said the plaintiffs' claims were without merit.

"The court can find no legal principle that prevents DOI from acting in the face of uncertainty," the decision read. "Nor can the court conclude that the Secretary abused his discretion or acted arbitrarily, capriciously or in violation of law when he chose to err on the side of caution in protecting a national treasure, Grand Canyon National Park."

"This is a great day for the Grand Canyon, the wildlife and the communities in the area, including the Havasupai tribe," Zukoski said.

Zukoski cited potential damage to the water quality and aquifers in and around the Grand Canyon that uranium mining could cause, in addition to disruptions to wildlife and the daily lives of members of the Havasupai tribe.

Yount said that the judge came to an incorrect conclusion, saying that the potential for environmental damage "was significantly exaggerated."

Much of Yount's argument centered on the establishment clause to the First Amendment, which prohibits laws regarding the establishment of religion. Yount said the notion of barring lands that were sacred to Native American religions should have been a violation of the clause.

"It is pretty clear that the decision was not based on the specific sites but on Native Americans' feelings about the sacred land," Yount said.

Yount added that he won't appeal, saying he lacks the money and means to do so.

"The decision kills uranium mining for a generation," he said. "I'll be 74 when the ban ends, and I highly doubt I'll have any claims at that point."