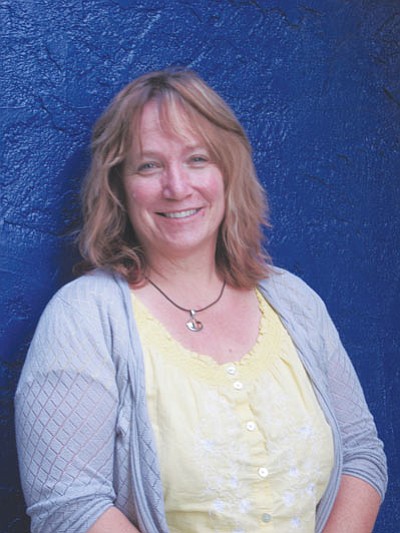 GRAND CANYON, Ariz. - A change is in the air and it's not just the weather. After 15 years on the South Rim and six years as Grand Canyon National Park's South Rim Artist in Residence Program Coordinator, Rene Westbrook is moving on.

Last week saw the completion of Westbrook's employment at Grand Canyon National Park (GCNP).Westbrook wrapped up all her unfinished business, finalized the selling of her home, and handed her possessions over to the moving trucks as she sets out for her new home in Oregon.

Rene Westbrook is a mover and a shaker. She gets things done. That's one trait that has made her indispensible to the Grand Canyon and all visiting artists.

The Grand Canyon's Artist in Residence Program is one of the most prestigious art residency programs in the nation. Since June of 2009, nearly 100 artists have visited the Canyon as resident artists. This year saw over 450 applicants to the residency program, 36 of which were selected - 24 for the South Rim and 12 on the North Rim.

Every two years the cycle for applicants begins. A four to five member jury panel selects the artists for their excellence of art and an ideology in their work that is relevant to preserving the canyon, environmental issues and cultural awareness. Artists are featured year round on the South Rim and seasonally on the North Rim. Artists do not receive any compensation but are given an apartment to reside in on both rims for the duration of their stay. The length of residency is dependent on the artist, but can last from a week to several months. Past artists have included contemporary and traditional artists, sculptors, fiber artists, jewelers, photographers, videographers, writers, composers, musicians, dancers, storytellers, and designers as well as many others.

Westbrook has been the key player in making the program available to artists and has been responsible for it running smoothly year-to-year. Westbrook is no stranger to art or the national park system.

She came to the canyon 15 years ago after her husband took a job at the Grand Canyon as an electrician. Westbrook came into her own at the Canyon by first working with the Grand Canyon Music Festival and helping to get the School of Rock started. Eventually she helped establish the artist in resident program for the South Rim as it is known today.

"I stepped into the program when it was brand new," Westbrook said. "The North Rim had had a program for about seven years and the South Rim would only occasionally have an artist in residence. I was given the responsibility to create processes, guidelines and criteria. When I was asked if we could bring in some artists interested in conservation and ecology I was so excited. Artists are really expressive to time and place. That's fascinating to me and is really an important contribution. Seven years later we have a premiere program that is really competitive and unique across the system."

Westbrook devoted six years to helping the program become a launching point for artists visiting the Canyon. That devotion came from a childhood of adventure and a career that spanned several states and one of America's other great national park.

Westbrook was born to a family of adventures. During her childhood in Reno, Nevada, Westbrook's parents enriched her life with travel and summers spent on commercial fishing boats. At 18, Westbrook got her first job, working in Yellowstone National Park.

For the next five years, Westbrook worked as a seasonal employee at Yellowstone, doing everything from writing newsletters to driving a bus and working for the concessionaires.

"One winter I worked in the interior of the Yellowstone, shoveling snow off the roofs of buildings. That was my whole job," Westbrook said. "It was a blast! We would just ski to work and then ski at work and ski home."

Having been a competitive ski racer in high school and college, Westbrook was in her element. During this time Westbrook met her husband, Dan Morin. Fed up with minimum wage jobs, Westbrook moved to Bozeman, Montana to attend Montana State University. Unsure what to major in, Westbrook's advisor told her to take a few classes in things that she got extreme pleasure from. After trying literature and philosophy, Westbrook found her calling in her ceramic arts class.

After graduation, Westbrook applied for an opening as the coordinator of the artist in residence position at the Montana Arts Council in Great Falls, Montana. Normally a three to four year rotation, it was a perfect time for Westbrook to step into the position.

"As a result of this opportunity, I met essentially every art educator in the state," Westbrook said. "And a significant amount of contemporary artists and people running all kinds of non-profits."

With the knowledge and connections the position offered her, Westbrook was able to realize one of her dreams.

"I had this idea of getting a travel trailer," said Westbrook. "Because of my childhood and traveling, I wanted to do an installation (of art) inside a travel trailer and take it to campgrounds and drive in and have this artwork on display."

After three years, the Montana Arts Council helped Westbrook realize her dream. For six weeks, 16 artists and musicians made up the "Caravan Project". Consisting of 12 individual art units, the group traveled to rural Montana communities with a trial by fire approach. Today the group calls themselves "The Caravan Artists". They have done many traveling art shows since.

In 1995, Westbrook gave birth to her daughter and her and her husband moved to Glacier Bay, Alaska where Westbrook cared for her daughter and spent time working with children, including painting murals with them on many of the town's walls. From there, Westbrook's husband took a job at the Grand Canyon. Of which the canyon has been the beneficiary of Westbrook's diligent and focused set of skills and talent.

"I have loved my job," Westbrook said. "I have a lot of mixed feelings, I think I kind of realized I'm one of those people who like to get things going, and when it really starts to hum along, I'm ready to move on."

Westbrook took a charismatic stance when asked about her hopes for the future of the Artist in Residence Program at the Grand Canyon.

"I hope it keeps rolling," Westbrook said. "I hope they (GCNP) continue to honor the program by bringing in someone that knows about the arts and someone who can run with it and keep it moving in any direction."

The program has artists set to visit the canyon through December 2015. After that, GCNP is uncertain of the program's future due to budgeting costs. Westbrook is hopeful it will continue.

"As long as artists get to come to the canyon, they will. Artists will come without a residency program," Westbrook said. "But there's something unique and powerful about these sorts of artists being allowed to come and work under these circumstances. My hope for the program is that it will continue in the same spirit it was created."

Westbrook and her husband moved to The Dalles, Oregon, where she plans to enjoy life for a while before pursuing her next adventure.