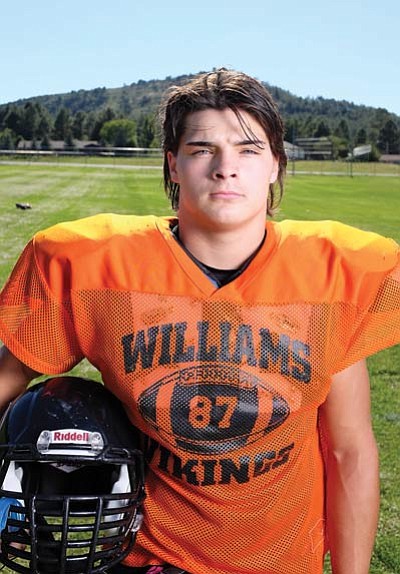 WILLIAMS, Ariz. - The Williams High School football team is 2-4 with four games left in a tough, competitive schedule. Those games will decide whether the Vikings can even get a playoff berth in this year's football season.

The Vikings had a tough week of practice leading up to the team's loss against Lee Williams 20-0 on Sept. 26.

Head coach Jeff Brownlee said the coaches were concerned going into Friday's game because of the difficult practices. But while Lee Williams was big, Brownlee said they were not any better than the Vikings.

"We just did not execute the way we needed to win football games against good opponents," he said. "It was unfortunate for us as a coaching staff and for the players to let that game slip away. We struggled and you saw it on the field and we were on the wrong side of it."

Brownlee pointed to a lack of team unity that the Vikings usually display while playing and the lack of focus during practice.

"There are good kids who play hard and do well, they did well, but you still need 11 people on the field all playing together to accomplish that one common goal," he said. "We just lacked that Friday night."

On Oct. 3 the Vikings suffered another loss to Joy Christian, 54-13, in a game where they were out matched physically and by a faster opponent. But Brownlee said the team had a good attitude even though they knew it would be a tough game.

"We went down there on the premise of playing hard and having fun," he said. "And our kids played hard and they had fun. They hadn't had fun in awhile."

For the past five years, Brownlee said the Vikings have always had more wins than losses at this point in the season. This season has been particularly hard for the players to get used to because of the losses, which have all come at the hands of the top eight teams in the Vikings division.

The Vikings coaches have worked with the players to help them let the frustration and other distractions go and just play football and have fun.

"That's what they did, they went down and played football," Brownlee said.

In the first quarter, Joy Christian stopped the Vikings opening drive and scored. When the Vikings got the ball back, Kristian Holmes ran 65 yards for a touchdown. The Vikes were ahead of Joy Christian 7-6. But despite scoring against a good football team, the Vikings could not keep up.

"We just could not stay with their speed," Brownlee said. "They did not physically push us around, they executed very well but their speed was tremendous and we had a hard time with that."

The Vikings scored once more on a 25-yard run by Holmes in the fourth quarter. While the gap between the two teams' scores was wide, Brownlee said the coaches were happy with what they saw.

"We saw a lot of exciting things that we hadn't seen throughout the year," he said. "We saw the kids have fun, work hard and play the game how it is supposed to be played."

"He played outstanding on the offensive side of the ball," Brownlee said.

With four games left in the season, Brownlee hopes there still might be an outside chance for getting to the playoffs again.

"That's what we're really focused on," Brownlee said, adding that it will take four wins to get there.

The Vikings play Rock Point this week. Brownlee said this is a game the Vikings can win.

"We need to play a team we can get some confidence in ourselves again," he said. "The key is the kids are playing well again. And we're going to try and make a run the next four games. That is vital for us and for our program."