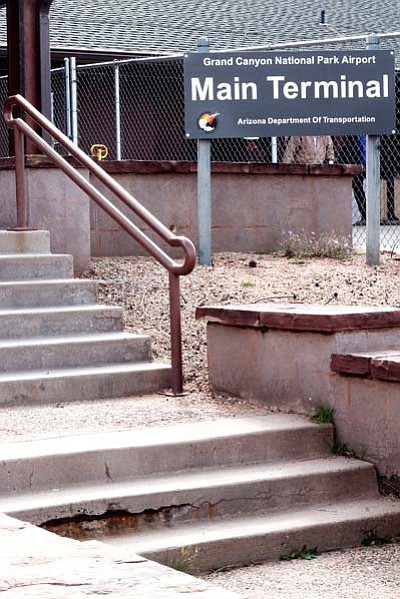 The entrance from the runway to the main terminal at Grand Canyon Airport shows signs of deterioration on the sidewalks and steps. Loretta Yerian/WGCN

TUSAYAN, Ariz. - In the next five years, Grand Canyon National Park Airport plans to build a new terminal at the airport and dig a well to keep the airport financially self-sustaining.

Normally airports are updated every six to seven years, but it's been almost 50 years since the main terminal at Grand Canyon Airport was built. It has yet to receive its first renovation. The terminal, built in 1965, retains its place in history, but the building is slowly falling into disrepair.

Sonya Herrera, administrative services division director for ADOT, said the terminal is in need of some major changes.

"Our infrastructure absolutely does require some upgrades. Our terminal does not meet the TSA and FAA requirements," Herrera said. "We have a limited ability to support our passenger requirements, our tenant capabilities are also limited and our opportunity for revenue generation."

According to ADOT, the interior of the terminal and the water system at the airport are outdated and undersized for the volume of passengers it sees. Restrooms in the terminal are undersized, retail space is limited and security areas are maxed out. With such high volumes of passengers, visitors are crowded into the lobby or forced to wait in security lines stretching to the runway.

"There is no secure holding area," Herrera said. "Whenever we have passengers go through our TSA screening area, they have to go outside. With the inclement weather, there is no place for them other than waiting outside in a fenced area."

Additionally, the entrance to the main terminal provides only one access to the terminal. Damaged sidewalks, retaining walls and steps leading to the entrance show strong evidence of deterioration. The steps are a concern as they are not up to regulation with the Americans with Disabilities Act (ADA) by not providing ramps to bypass the steps. At the Nov. 5 city council meeting, ADOT presented a master plan to the council to show how they plan to resolve these issues.

"Currently we are undertaking an effort to update our master plan," Herrera said,."A significant component of our master plan is community outreach because of the interest of the community and the fact that we really want everybody who wants to be heard to have that opportunity, we have incorporated twice as much public meetings as is typical of the master plan. Everybody will have that opportunity to have their voice heard."

ADOT's master plan includes building a new terminal. The terminal will be up to TSA regulations as well as ADA approved and will provide adequate space for airport guests.

ADOT Deputy Director for Business Operations, John Nichols, said a new terminal allows the airport to continue their support of commercial airline operations increases revenue at the airport and will be utility and energy efficient.

"We want to upgrade the terminal facility to better support the community and the airline organizations that are here. They all support it." Nichols said.

The new terminal will be constructed 200 yards north of the current facility.

Nichols said one of the components vital to the master plan is to find a consistent water supply for airport usage. In order to achieve that, Nichols said the airport plans to dig a new well.

"The water supply is probably one of the most critical components of being in this part of the country. We are looking at digging a small capacity well." Nichols said, "Our plan is to look at a possible well site in the eastern-southern area, just opposite of where the communities key water supply is located."

Currently, the airport purchases water from the Tusayan Water District.

Tusayan's water is primarily supplied through two small wells and the airport can only purchase water from the city in the spring and the fall due to the demand placed on the wells during the summer and winter. The airport is concerned that the current amount of water they receive from Tusayan will not meet their future needs.

Therefore, they plan to dig a well that will produce 30 gallons of water per minute and will only be available for the airport to use.

According to ADOT, the purposed well's location is far enough away from the town's well and is not a threat or in competition with Tusayan's water supply.

It will cost the airport between 2.5 to three million dollars to install the well and will take several years to complete.

The construction of a new terminal and digging a new well, are projected to last the next five years. The airport currently has 19.45 million dollars scheduled to invest in the upgrades. ADOT said the primary source for funding for the updates are through FAA grants. FAA grants are provided from taxes visitors pay when they fly into the airport.

"When people come to the Grand Canyon Airport, they pay a tax and that tax goes to the FAA and they give it back to us in the form of grants," Nichols said.

FAA grants can only be used for airport infrastructure and cannot be used for daily airport operations.

According to a Pollack report, Grand Canyon Airport helps provide $104.3 million dollars to the Grand Canyon area through tourism industry and provides 1,276 jobs.

Grand Canyon Airport is the fourth busiest commercial airport in the state and is the only state owned airport.

In 2011 the airport received TSA support in security and also introduced scheduled daily flights with their 737 Service to the Grand Canyon area. This service lasts through peak tourist time at Grand Canyon National Park, and is in addition to providing services for chartered flights.

Nichols said ADOT and the airport have no intention of turning the airport into Los Angeles International. They want to enhance visitor's perceptions when they choose to fly into the airport.

"We're talking about building a new facility," Nichols said, "Replacing a 50 year old building with something that is more energy efficient, modern, and can support TSA and ADA requirements. Our 1960's vintage terminal does not represent Arizona well. We want to be current in our future passenger needs and we need a water well that is going to be able to meet those future needs."

"The Grand Canyon Airport sits right on the edge of Arizona's crown jewel and it represents Arizona." Nichols said, "We want a terminal that better represents Arizona and the community and we want and need a reliable water source."