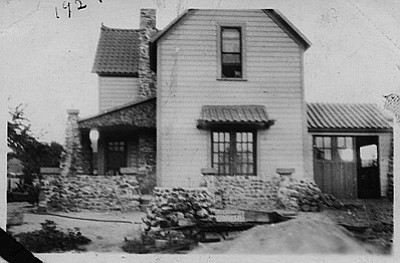 WILLIAMS, Ariz. - The Yellow House in Williams is somewhat of a local landmark, but few people likely know the history behind the property.

However as of Oct. 8, the house located at 120 S. Sixth St. is listed on the National Register of Historic Places, which reinforces its historical significance to both locals and visitors alike.

The Saginaw Mill built the Yellow House, also known as the Negrette House, in 1893. The company used it as a bunkhouse and an office. In 1919, the Negrette family bought the house for $810. Until about 1927, the family made some additions and changes to the house, including adding distinctive stonework to the exterior.

The house remained in the Negrette family for 93 years, until the current owner Kerry-Lynn Moede bought it in 2012.

Since that time, Moede has worked diligently to get the house listed on the National Register. It takes the average person 100 hours to complete the application, which requires recording extensive historical and architectural details about the property. Moede submitted seven different versions of her application before getting approval.

The application must then get approval from city officials, the State Historic Preservation Office and the National Register of Historic Places Office.

Moede said that the city of Williams has been very supportive of her efforts to get the house on the National Register.

"It shows that the city is interested in preserving our history," she said. "My hope is that it will encourage other people to do the same thing, because there's no getting around the fact that it looks better. It now is a point of pride in Williams instead of this creepy haunted house, and just imagine if more properties in town had that done to them."

In Moede's opinion, the unique stonework on the house is what helped the property earn a place on the National Register.

"That was the feature that really stands out as unusual and architecturally important, because the building itself is just Victorian farm or Victorian folk style, which is very simple and there's a lot of it in town," she said. "But because this guy added the stonework out of the local basalt stone, that gave it a lot more architectural interest."

Since buying the house in 2012, Moede has done a great deal of renovations to the house, all while trying to maintain the historic character of the home.

"My absolute goal from the beginning, and that's what I told the family, was to take it back to its former glory, not to change it, not to rebuild it," Moede said. "I had huge pictures from 1927 plastered up so that the carpenters would refer to it and follow it and do it the way it was before."

Now that the Yellow House has received its National Register designation, Moede is working on ordering a plaque to inform people of its historical significance. Once the plaque is installed, she plans to have a public unveiling.

Moede said she hopes the Yellow House's designation on the National Register might inspire other local property owners to maintain the historic character of their properties.

"There's some wonderful buildings in town still that need to be preserved and saved, and I think sometimes people avoid doing it because they think it's going to be too hard or there'll be too many regulations or there'll be too many hoops to jump through, but Williams is really supportive of that. We have some showpieces if they would get restored and taken care of, so that would be my hope is that this keeps the ball rolling."