Williams sawmill up and running, plans underway to expand operation 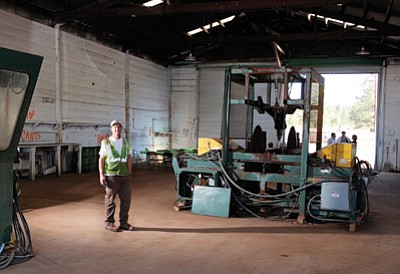 Newpac Fibre CEO Chris Stephan stands next to milling equipment the company recently purchased that used to run at a mill in Ash Fork between 2007 and 2009. Ryan Williams/WGCN

WILLIAMS, Ariz. - Logging has historically been a vital industry for northern Arizona. So as chance would have it, when the new sawmill owners in Williams went looking for additional equipment, they ended up with a machine from back east that has roots in Ash Fork.

Newpac Fibre, located at 325 S. Garland Prairie Road, recently bought a saw from a mill operator in Maryland. That operator had purchased the saw from Southwest Forest Products in Ash Fork, the mill for which the saw was built. The piece of equipment was in operation in Ash Fork from about 2007 to 2009, but the Maryland sawmill never put it into service after purchasing it.

The new saw isn't the only tie that Newpac has to historic logging operations in the area. The site where the new saw will operate in the coming months was also a former mill site. Precision Pine and Timber operated at that location until about 1995.

But despite all of their ties to the past, Newpac Fiber officials have big plans for the future in their first year of operation. After purchasing 25 acres of land on Garland Prairie in October of 2013, Newpac bought the Perkins Forest Products mill, located just southwest of the Newpac site, in September.

Newpac began lumber production out of the former Perkins Forest Products location about a month ago. The company hired 13 employees, most of whom are local, who help produce about two to three truckloads of timber per day five days per week out of that location. Perkins Timber Harvesting supplies Newpac with lumber.

"Right now we're trying to build inventory for winter to be able to make it through winter," Stephan said. "This is a full time job. This isn't seasonal. We're not shutting this mill down for snow."

Meanwhile, Stephan is working on getting the new saw up and running at the Newpac site. The new saw from Maryland will be used to make the first cut on the logs.

"So we scan the log to see how big it is and then the saws automatically adjust side to side to get the best cut," he said. "That's able to process everything in the forest from five inches to 22 inches. That makes up the majority of what needs to get cleaned in the forest."

Stephan is still waiting for additional pieces of support equipment to arrive, which will turn the wood into different products such as woodchips and sawdust. He expects his new setup to be fully operational by spring.

The new system will require about 20 people to operate for a single shift. Depending on the support equipment around the new saw, the setup is capable of increasing production to about 25 truckloads of lumber per day.

Newpac currently isn't affiliated with the Four Forest Restoration Initiative (4FRI), the largest stewardship contract in Forest Service history, which spans 2.4 million acres within the Kaibab, Coconino, Tonto and Apache-Sitgreaves national forests. However when asked about the possibility of working with the 4FRI project, Stephan gave a similar answer to the one he gave in a July interview.

"We are open to working with every party where there's mutual benefit," he said. "We have the ability to take 4FRI wood immediately."

For now though, Stephan is optimistic about Newpac's operations so far.

"We're proud of what we do here," he said. "We're excited about what it's bringing to Williams."