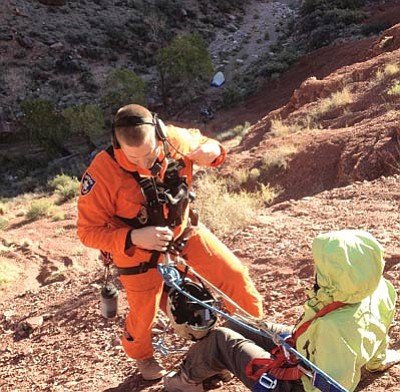 A search and rescue team member prepares an injured hiker who fell off the Clear Creek Trail in Grand Canyon for an airlift to safety. Photo/Coconino County Sheriff's Office

GRAND CANYON, Ariz. - A woman from Tucson, Arizona fell off Clear Creek Trail in the Grand Canyon Nov. 2, narrowly avoiding falling off an 80-foot cliff to a creek bed below.

The 68-year-old hiker slipped and fell down slope off the trail around 7 p.m. She came to rest with her head down slope about three feet from the cliff's edge.

When the hiker tried to move, she slid further down slope because of loose soil and rocks. She remained still while her two friends activated a satellite emergency notification device.

The National Park Service at the Grand Canyon's South Rim was advised of the emergency notification and sent a ranger to the area. The Park Service ranger hiked for six hours from Phantom Ranch; reaching the victim around 3 a.m. Rangers determined the victim had suffered an injury to her leg. Because of dangerous and unstable ground, Park Service officials requested assistance from the Coconino County Sheriff's Office Search and Rescue Unit and the Arizona Department of Public Safety (DPS) Air Rescue helicopter, who can conduct night operations.

The DPS helicopter flew two heli-rescue members, one from the Coconino County Sheriff's Office and the other from the Flagstaff Fire Department into the canyon where they were able to land about a mile away from the victim. Rescuers hiked to the area where they had to secure ropes and rappel down to the victim. The victim was secured by a harness and then "short hauled" or flown out with a rescuer.