Power shifts to Tusayan voters to choose mayor in 2016 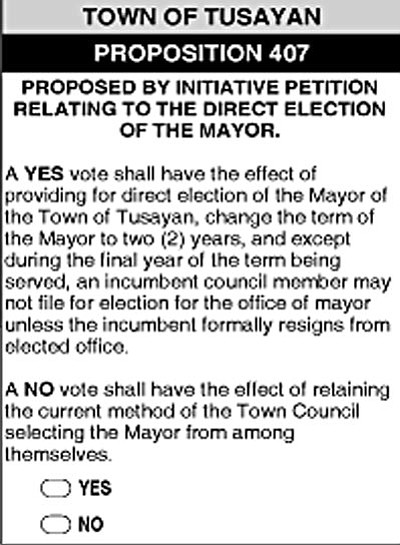 This is a sample ballot with the text of Proposition 407 regarding the election of the mayor of Tusayan. Sample ballot courtesy of Coconino County Elections

TUSAYAN, Ariz. - In the future, voters will decide who holds the office of mayor in the town of Tusayan rather than council members. Voters made the decision through a 66.23 percent yes vote on Proposition 407 in the Nov. 4 general election.

The proposition proposed a direct election of the mayor by members of the community.

Countywide, voters approved Proposition 403, a three-tenths of a cent sales tax that will pay for the maintenance and preservation of county roads. The proposition passed with 63.72 percent of the vote. The tax will be in place for a period of 20 years starting on Jan. 1, 2015 and will be equal to about $0.30 on a $100 purchase. Prop 403 will generate an estimated $6 million to $7 million per year to go toward snowplowing, dirt road grading, and road surface chip sealing.

In addition, about $4 million per year will be dedicated to road projects in the first 10 years as part of a Road Improvement Plan, including five road projects in the Williams area. The projects include traffic interchange modification for 0.25 miles near Interstate 40 at Brannigan Park Road and Shadow Mountain Road, a mill/overlay on 1.71 miles of Perkinsville Road from the Williams city limits to East Foothill Trail, a mill/overlay and shoulder widening on 2.09 miles of Old Route 66 between Parks Road to Spitz Spring Road, a mill/overlay and shoulder widening on 1.43 miles of Spring Valley Road between Old Route 66 and Lonesome Dove Lane, and a mill/overlay on 2.52 miles of Double A Ranch Road between Cumberland Road to Quarry Road.

In the state races, Republican Doug Ducey was leading Democrat Fred DuVal in the race for Arizona Governor. Unofficial results show Ducey leading with 53.83 percent of the vote.

In the race for U.S. Representative in Congress for District 1, Democrat Ann Kirkpatrick received 53.11 percent of the vote to beat out Republican Andy Tobin.

In the race for State Senator in District 6, Republican Sylvia Tenney Allen defeated Independent Tom O'Halleran with 51.48 percent of the vote.

In the race for Secretary of State, Republican Michele Reagan was leading Democrat Terry Goddard. Unofficial results show Reagan leading with 52.38 percent of the vote.