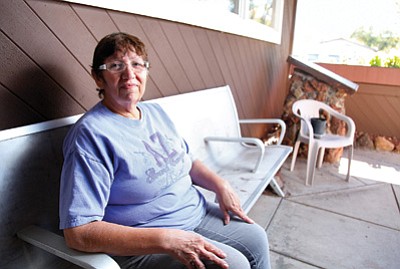 WILLIAMS, Ariz. - A new face recently took the helm at the Williams Senior Center, but while she may have a new title, she's no stranger to the facility.

Dolores Paredes, who has served as the Senior Center's cook for 17 years, recently became the center's director. Paredes takes the place of Max Bishop, who retired in September after working as the director for seven years.

"Way long ago, it was just a good job," Paredes said of when she started working as the center's cook. "And then afterwards you get to meet the seniors and you just become involved. After 17 years I just know them so well."

In the past, Paredes had helped Bishop with some of his responsibilities when he went on vacation in addition to her cooking duties. Because of that, she decided to apply for the director position.

"So I knew I could do it," she said. "It was really just a natural progression."

"I think she'll do great," Tracey said. "She knows the community, she's been there long enough, she's already made a lot of connections, and I think her position as cook will be hard to replace as well."

Since the Senior Center doesn't have a new cook yet, Paredes has still been helping out in the kitchen in the short time that she's had the director's position. In addition, she's been busy overseeing the rest of the center, such as the recreation and health activities, and working together with other agencies that are involved in its operation.

Although Paredes said the Senior Center doesn't need a lot of improvement, she does have one goal as the new director.

"I would just like to see more seniors come and utilize our facilities and our programs," she said. "I don't think enough of them know how much this is a great social program. It's not only lunch, it's talking to people your own age, it's taking advantage of the medical shuttle, taking advantage of all the programs that are here that I don't think people know about."

So far, Paredes' favorite part of working at the Senior Center is the people she meets.

"I love the seniors," she said. "You don't do for them as much as they do for you. There's just so much you can take from all of their history. It's like having 50 grandparents."

And the feeling is mutual for the Senior Center's regulars. While Adlina Pietras said she'd miss Paredes' cooking, she's happy about her promotion.

"She likes to help everybody," Pietras said. "We love her very much."

Maria Leonet added that all of Paredes' experience at the Senior Center has made for a smooth transition.

"She knows everything that's going on," Leonet said. "She keeps an eye on everybody."

All of the seniors are very fond of Paredes, according to Flora Hall.

"She's a people person, which is important. She knows us all by name," Hall said. "It's really wonderful to have somebody working with you that cares about you, and she's one of those."