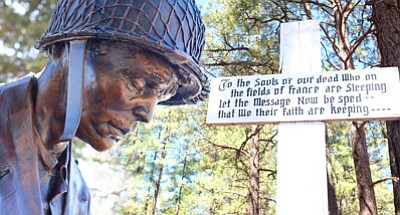 The Williams Own Veterans Memorial and the Cross of the Unknown Soldier at the Williams Cemetery. Photo composite/Ryan Williams/WGCN

WILLIAMS, Ariz. - Williams residents and visitors can honor veterans this Memorial Day weekend with a parade, concert, and memorial service.

The events kick off Saturday with the Memorial Day parade at 11 a.m. on Route 66. This year's parade theme is "Home of the Free, Because of the Brave." The parade's grand marshals will be anyone who served in the military.

Besides local veterans groups like the Veterans of Foreign Wars (VFW) Matthew James Broehm Post 12128 and the American Legion Cordova Post 13, the Vietnam Veterans of America Mohave County Arizona Chapter 975 from Kingman will march in the parade.

"We're asking anybody who has served in the service to come out and we will put them in the parade as well," said Williams-Grand Canyon Chamber of Commerce Events Coordinator Darlene Bitter.

So far about 15 groups have entered the parade, but Bitter said she is still accepting entries. More information is available at (928) 635-0273.

She added that she hopes for a good turnout along the parade route.

"Definitely come out and show your support to those who have been in the service or fought for this country," Bitter said. "It would be great to come out and wear your red, white and blue in support of our veterans who have fought for us."

After the parade Ted Nichols, a Williams resident and former musical director for Hanna Barbera, will lead his second annual Memorial Day concert.

"We're glad to do it again because we want to do it, especially for the veterans, and bring the Lord into it," Nichols said.

The free concert titled "Celebrate America" will be at 12:30 p.m. at the Babbitt Polson Warehouse Stage near the Williams Visitor Center. The program includes nine songs, some brief narration and lasts about 40 minutes. About 25 singers will put on the performance.

The concert will start with a color guard presenting the flag, the recitation of the Pledge of Allegiance, and everyone singing the "Star Spangled Banner."

Nichols is a veteran himself, having served in both the Navy and the Air Force.

"Last year many of the veterans were very moved because we recognized them during the concert, which we'll do again," Nichols said.

Williams resident and VFW member Michael Rioux will speak at the event.

"He'll be talking about what Memorial Day stands for and all that," said event organizer and American Legion member Fred "Perico" Avila.

Father Kilian McCaffrey from St. Joseph Catholic Church will also speak at the event. In addition, the memorial service will feature singers, an honor guard, a firing squad, and Lu Carle playing taps.

On Sunday evening, a group of volunteers will get together to place flags at the graves of all of the veterans in preparation for the memorial service.

"It takes quite a bit of walking over there in the cemetery," Avila said. "I think we've got about 170 veterans out there now."

He added that if the volunteers accidentally miss a veteran, flags will be available at the memorial service for family members to place at the graves.

Avila recalled that during his remarks one year at the memorial service, he reminded people of the true meaning of Memorial Day.

"More people were out here...making hotdogs and hamburgers and they forgot their veterans at the cemetery," Avila said. "I said, 'This is more important to me and you people that have loved ones out here that lost their lives or whatever. Hot dogs and hamburgers are not that important.'"

Avila hopes the community will come out and honor those who have served at the memorial service.

"Memorial day is to celebrate the people that have given their life and that served their country," Avila said. "That's the respect that we pay for them to have the freedom that we have. We have the freedom here because of some that are laying out here now at the cemetery or men and women that are serving now."