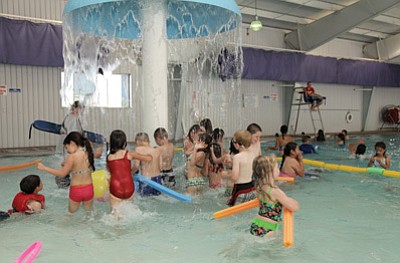 Kids play in the Williams Aquatic Center pool. The pool opens Saturday for the summer season with a free swim and luau party. Ryan Williams/WGCN

WILLIAMS, Ariz. - Dig out those swimsuits, because the Williams Aquatic Center will open for the season on May 24 with a free swim and luau party.

The pool will be open on Saturday from 10 a.m. to 4 p.m. and the party takes place from noon to 2 p.m. The Friends of the Williams Aquatic Center is putting on the party, which will include a barbecued pork lunch with all of the fixings, pool games for all ages, and prizes including season passes, swim lessons, and punch cards for individual swim sessions.

"It's going to be a great beginning to the season," said Recreation Director Rose Newbold. "We really would like people to come out and have fun. It should be a nice fun day with lots of things going on."

Although the pool is closed on Sunday and Monday, from Tuesday to Saturday, the pool offers several activities including aerobics, lessons, lap swimming, and public swim hours. New this year is the cannonball corner, where kids can take turns jumping off of one of the diving blocks.

The Summer Rec Program and Camp Civitan have exclusive use of the pool during their scheduled times, from 10 a.m. to noon on Wednesdays, Thursdays and Fridays.

People can also purchase a 10-punch pass this year for ten times the regular rate.

"Basically that's for convenience so you don't have to have $4 or $3 every time you walk in the door," Newbold said, adding that any remaining punches can be used next season.

"Buy them early and swim often," Newbold said. "Make them well worth your money."

Swimming lessons start June 3. People can sign up for lessons from now through the first week the Aquatic Center is open. Lessons cost $30 for an eight-lesson session and are scheduled on a first come first served basis.

Despite the city's water crisis, Williams City Council members unanimously voted at their April 10 meeting to allow the Williams Aquatic Center to open, calling it a public benefit.

The 8,000 gallons of water per month for refilling the pool, which amounts to 32,000 gallons for the season, will be hauled in from outside sources so as not to use the city's water supply. The cost to haul that amount of water is estimated at about $2,000 for the season.

"With an automatic shutoff valve a kid is more likely to hit it again and it would run for a period of time that wouldn't be necessary," Newbold explained.

It cost about $250 to retrofit the showers with low flow fixtures. Workers also sealed the pool deck at a cost of about $500, which will allow for disinfection/sanitization with the least amount of water.

In addition, pool staff has created policies for minimizing shower usage and explained those to patrons through signage. Newbold estimated all of these steps will reduce water usage at the pool by about one-third.

"So I'm very optimistic that after this season the water usage report will be very positive for the council," she said.

Newbold said she is grateful that the city allowed the pool to open this year. On average 83 people used the pool each day during the 2013 swim season for a total of 5,914 users for the summer.

Newbold is still about $200 short of raising the $1,200 needed to pay for all four free swim days this summer. So far donors include the American Legion Cordova Post 13, the Williams Clean and Beautiful Committee, Conoco, the Friends of the Williams Aquatic Center, Grand Canyon Railway, the Kiwanis Club of Williams, the Williams Lions Club, and the Williams Rotary Club.

More information about donating to the pool or pool activities is available from the Williams Aquatic Center at (928) 635-3005.