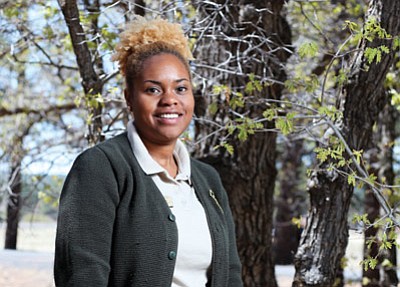 Harrison has worked with the U.S. Forest Service for about 12 years. She comes to Williams after five years of working on the forest management staff in Washington D.C.

"It was a really great job, I worked with great people, but one of the things I really missed is really feeling like I was out on the ground doing management," she said. "When you're in a cubicle and you're writing policy, it's important, but the best thing about working for this agency that I missed being in D.C. is the engagement that you have with people at the forest level."

"My main job is I'm a public servant," she said. "So having good customer service and serving the public I think is really the most important thing I do. Managing natural resources is important, but there's that people aspect of it that just can't be overlooked."

Harrison, who is originally from Alabama, first became interested in a career in natural resource management when she got a summer job with the Forest Service on a trails crew in Washington state.

"And I was hooked," she said. "That's all it really took for me, that 'I get to do this every day?' And I think it has been probably one of the best decisions I have ever made, because I know so few people who go to work and really enjoy the work and I get to say that I do that."

She went on to earn a bachelor's degree in forest resource management and a master's degree in urban forestry.

According to Harrison, one of the biggest issues facing the Williams Ranger District right now is the ongoing drought conditions in the area, which Harrison said were made worse by the recent dry winter.

"It's not a question of if we're going to get a wildfire, it's when," she said. "So it's us being cognizant of the extreme conditions that we have now and being committed to having our resources, being responsive when we get stuff, and using whatever tools we have at the ready to suppress fires."

Harrison said resource management is important for the local community and visitors alike since both groups enjoy using the forest land. She added that part of the Forest Service's job is to work with the community to make sure residents know how to make their space defensible.

One of Harrison's primary goals as the Williams District Ranger will be getting to know local community members.

"This forest and this district has worked really hard to forge good human relationships with folks in this community and to be a partner, and so I want to maintain and sustain those relationships and I want to build on them," she said. "That's the most important thing to me."

Harrison said she is happy to be living in Williams, since she's wanted to live in Arizona ever since she visited the Grand Canyon with her family as a child.

"So it's so great that it's come to fruition so that I have a job that I really enjoy and I love and I get to live in a place that I think is absolutely beautiful," she said. "And now I'm so happy that I really feel embraced by the community."