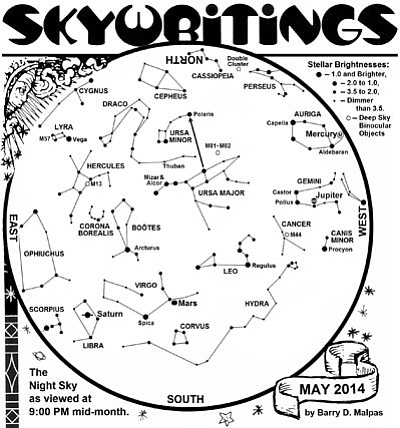 Of all the planets, Mars has captivated the imagination of astronomers as the most possible dwelling place for life in our solar system beyond Earth.

But even without the intriguing prospect of extraterrestrial creatures, the red planet still holds a fascination for observers. Mars, although not the brightest of the planets, varies more in its brilliancy than any other. Of the outer planets, Mars is also the most rapid in its movements across the sky. Even without a telescope, its motion this month against the stellar background is easily detected over the span of just a few days as it passes through the constellation Virgo.

Mars is a somewhat disappointing object to observe through a telescope most of the time. It appears as a rather featureless small reddish ochre disc. However, during a few months every two years, when both Earth and Mars are on the same side of the Sun (known as opposition), the apparent size of the planet is greatly increased. Since neither Earth nor Mars have orbits that are circular (their orbits are ellipses), there are times when Mars is at its closest to the Sun, while Earth is at its farthest. If this happens during opposition, the two planets can be separated by a mere 56 million miles, making viewing of planetary features quite impressive. Such an event occurs on average every 15 to 17 years.

Though Mars just passed opposition in April, it will still be in a favorable viewing position for the next few months. With its distance near minimum, the planet will present a more detailed view of its surface. The polar caps, the seasonally changing irregular dark zones, sometimes massive global-wide dust storms, may be seen through moderately sized telescopes.

This month, try to find the red planet in the sky just west of the bright star Spica in Virgo. If you have a free evening, bring your kids to the CAS Williams Star Party, or visit Lowell Observatory where they can learn more about this fascinating celestial neighbor.

Members of the Coconino Astronomical Society, in conjunction with the City of Williams, will put on a Star Gazing Party from 7:30-9:30 p.m. on Friday at Glassburn Park in the natural area west of Rod's Steakhouse. Several large telescopes will be on hand to view the Moon, planets and other celestial objects. Organizers recommend bringing a folding chair, or blanket, and your own binoculars.

Malpas teaches Astronomy at Coconino Community College and is on the board of the Coconino Astronomical Society.