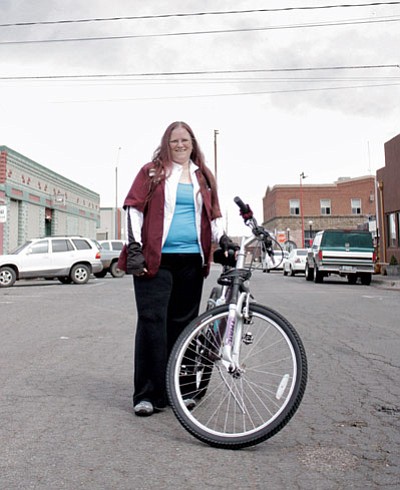 Cheri Porter plans to ride 30 miles in the Ride the Vortex event May 18 to support Multiple Sclerosis research. Marissa Freireich/WGCN

WILLIAMS, Ariz. - For the past few months, Williams resident Cheri Porter has been riding her bike around town and working out at the gym regularly.

She's not only exercising to get in shape, but also to support a good cause. Porter is training for a 30-mile bike ride in Cottonwood on May 18 to support Multiple Sclerosis (MS) research.

The Bike MS: Ride the Vortex - Sedona Verde Valley includes routes ranging from 30 to 150 miles long. All proceeds go to research, programs and services for people in Arizona who have MS.

Bike MS puts on 100 similar events throughout the country. Last year more than 100,000 cyclists raised more than $80 million to try to find a cure for MS.

So far, Porter has raised about $120 toward her minimum fundraising amount of $250.

"I'd like to be able to raise like twice that but I only have (a couple) weeks left," she said.

MS is an important cause for Porter, since her friend in Williams and sister-in-law in Texas both have the disease. It affects more than 400,000 people in the U.S.

"I know that MS can be a very debilitating disease and people struggle with it all the time because it affects the transmissions from their brain to their muscles, and so they sometimes have hard times getting up and moving," Porter said. "That's the point of supporting them is having the research to be able to get rid of it or to catch it soon enough where it doesn't debilitate too bad."

Bike MS will be Porter's first cycling event. She bought her bike a few years ago to get in shape.

"The more I got out there in the wild riding my bike around, the more I thought, 'I could just do this forever,'" she said.

As time went on, Porter started to consider doing a bike marathon. When she heard about the Bike MS event, she thought it would be ideal for her first ride.

Porter has been trying to work out every day by taking a spin class, using the elliptical machine, exercising her muscles, or riding her bike around town. She's also started eating healthier. She has lost 10 pounds so far, and hopes to eventually lose about 50 pounds.

So far Porter's longest training ride was 13 miles, which took her about three hours. Her route stretched from Rodeo Road to the airport, across Pronghorn Ranch Road, down Highway 64 and back.

"It was tough," she said. "I got off the bike a couple times and I walked up some of the hills. Because especially on the dirt part on Pronghorn, it's so hard to get traction to get going again."

Porter has also ridden a flatter 10-mile route around town, which she completed in about an hour.

She's planning to drive to Cottonwood before the Bike MS event to test out the route.

"If there's some big hills in there I'll just know what to plan for then," she said. "And it's not a race so if I can't do it I'm just going to get off my bike and walk."

Porter's goal is to finish the race and not be the last cyclist on the course.

She's prepared her bike by getting new tires and tubes, a cushioned seat, a mirror and special pedals that will help her cycle uphill.

With the race quickly approaching, Porter could use any support people are willing to give, including financial and moral support.

"If they see me riding around town they can cheer me on," she said.

More information about donating to Porter's Bike MS fund is available at www.bikemsarizona.org or from Porter at (928) 380-0416.