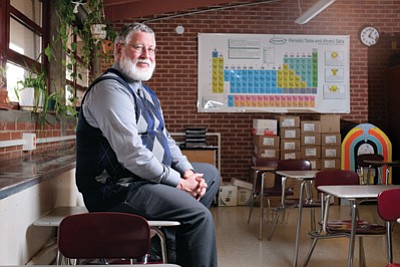 Williams High School science teacher Mike Fleishman will retire at the end of this school year. He plans to spend time traveling with his wife and enjoying his grandkids. Ryan Williams/WGCN

WILLIAMS, Ariz. - Mike Fleishman didn't set out to be a teacher. He graduated from Arizona State University with a degree in wildlife management.

But when he realized few jobs were available in that field, Fleishman knew right away he wanted to put his science background to use as a teacher.

When Fleishman started teaching in 1976, he became the fourth generation in his family to choose the profession. Now after a 38-year teaching career, Fleishman will retire in May from Williams High School (WHS).

Fleishman first came to WHS about 17 years ago to serve as the principal. After about four years he returned to teaching.

"It was a different reward," Fleishman said of working as an administrator. "It was good. But I guess the heart still lies in teaching."

"If it's a science I've taught it, basically," he said.

Fleishman's favorite subjects to teach have been biology and chemistry because of the strong science background he gained in college.

"I enjoy teaching the kids that struggle with math," he said. "I struggled with math, so I know how to teach it in a way, I understand what their problems are."

When asked what he's enjoyed the most about teaching, Fleishman responded, "watching the lights go on."

Fleishman has also enjoyed getting to know his students.

"When they walk through the door, I smile," he said. "I like these kids. They're mine. Once I have them, they're always mine. You can't put your heart and soul into a group of people without really forming that attachment."

The bond Fleishman has with his students has helped him to be a successful teacher both within his subject area and beyond.

"To me I always found that if I value them and I treat them with respect, I get the same respect back and what I have to give them is valued," he said. "It opens up the door for so much more than just content. Now you're talking about life skills and goals and you help them figure out, where are you going? What are you doing? How are you going to get there?"

Out of the many places where Fleishman has taught over the years, Williams is one of his favorites.

"I love this town, I love the people, I love the community," he said. "And I just thank the people of Williams who trusted me with their children. That's a tremendous honor."

Although Fleishman will miss teaching and interacting with his students, he plans to spend his retirement educating a different group of kids: his seven grandchildren.

"When you're a parent you're so busy just surviving," he said. "And grandparents can teach you how to fly a kite, and how to skip a proper rock across the lake, and how to collect flowers and press them, and go on fairy hunts and build pirate forts... and mix in a lot of information."

After he retires, Fleishman is looking forward to traveling with his wife. Their first stop will be Maui to meet their new granddaughter who was born on Thanksgiving. Disneyland is also near the top of the list.

"My wife and I have decided, let's go do the things we promised each other we are going to do while we can still do it," he said. "She's my soul mate, my love. Now this is what it was supposed to be about...Let's see what we can do. We're not out of fun yet."

The Williams Unified School District Governing Board accepted Fleishman's retirement at its Nov. 13 meeting, saying he would be sorely missed.

At that meeting, Fleishman told the board, "I love to teach and it would be a lie to say I'm not going to miss this. But I think I've reached the decision that most people in high school reach eventually-that you have to graduate some time."