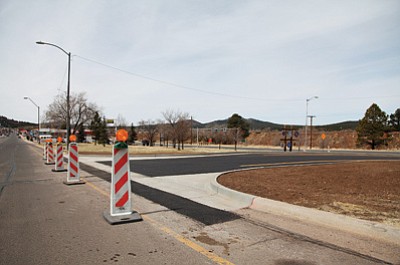 The city of Williams recently added a crossover east of Plum Street. Crews installed a second crossover at the east entrance to the Canyon Vista development at Boulderview Way. The developer, Forrest Purdy paid for the additional crossover at the request of city officials. Ryan Williams/WGCN

WILLIAMS, Ariz. - Street improvements on Route 66 and Railroad Avenue are complete for the proposed Canyon Vista subdivision on the east end of town.

The street work started in the last two weeks and was expected to wrap up last week.

Eastbound Route 66 remains two lanes in that area but received a right turn lane into the subdivision under the plan.

In addition to the improvements near the Boulderview Way entrance, Williams City Manager Brandon Buchanan said the city also asked the developer to install another crossover just east of Plum Street.

At the December council meeting, Police Chief Herman Nixon said the plans would be beneficial for slowing down traffic in that area.

In late 2010, Purdy purchased 70 acres next to the 80 acres he already owned for the planned development of the Canyon Vista subdivision.

As for the future development, no plans are currently in place.

"We haven't had any discussions with the owner or the developers on that at all," Buchanan said. "So their plans as of right now are anybody's guess."