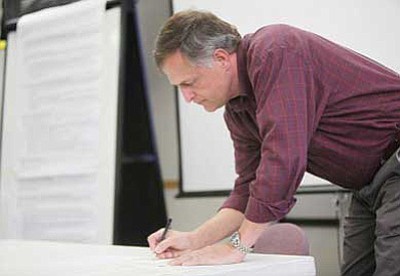 WILLIAMS, Ariz. - Good Earth Power AZ, LLC plans to develop a site in Williams that will accept logs and fiber from forest thinning under the Four Forest Restoration Initiative (4FRI).

The announcement came today after the U.S. Forest Service (USFS) Southwestern Region office approved a modified business plan for Phase 1 of the 4FRI contract. The contract originally included a development site in Winslow.

However, the majority of the task orders that the Forest Service has issued and is expected to issue in the next year are in the western area of the contract region. Processing the logs and fibers close to the task order areas will reduce truck traffic and logistics costs and improve efficiency, according to a press release.

"Our number-one priority is to increase the pace of restoration efforts in the forests as quickly as possible," Good Earth's Managing Director Darren Gurner said in the press release. "The best way to do this is by concentrating operations close to the task orders."

Good Earth did not specify how it will use the Williams site besides saying it will accept logs from the 4FRI task orders. Officials with Good Earth have not announced a specific site for the facility in Williams.

"Now that we have USFS approval of the amendment, we can further evaluate our options for the Williams site and how it can be optimally utilized to facilitate operations on task orders going forward," Gurner said in the press release.

On Sept. 13, 2013, Good Earth Power took over the terms and conditions of Pioneer Forest Products' former contract to thin 300,000 acres of the 4FRI project over 10 years.

4FRI is the largest stewardship contract in Forest Service history. It spans 2.4 million acres within the Kaibab, Coconino, Tonto and Apache-Sitgreaves national forests. The goal of the project is to restore ecological resilience within the forests.

After the transfer of the contract in September 2013, Good Earth Power representatives said the company planned to use local loggers and mills to complete the work on the initial task orders and build additional pellet mills throughout the four forests.

Williams Mayor John Moore said the development of the Williams site would be positive for the city.

"We're so happy to have Good Earth coming to Williams," Moore said. "While we don't have all the details yet, we know it will create jobs and we know that it will do some badly needed thinning in the forest."

"We're just thrilled that as the contractor moves ahead here we're going to be able to start getting a lot more work done across the south end of the Kaibab National Forest as well as other areas," Williams said. "And that's good news for everybody here. We are not going to see fires stop by any means, but as we begin to get more and more of this thinning done and acres treated, it's going to make our ability to manage this forest a lot more effective."

Williams expects the Forest Service to issue notices to proceed for the task orders on the Kaibab in April or May.