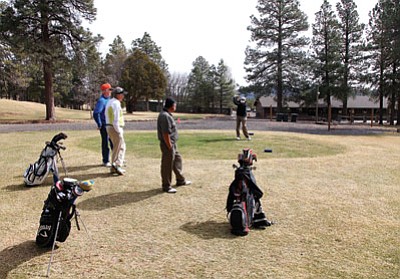 WILLIAMS, Ariz. - With spring-like weather arriving early this year in Williams, golf season is also off to an early start.

Last season the course opened on March 26, giving Golf Course Manager Scott Little time to do some behind the scenes preparations before the public arrived.

"I got here and the superintendent called me and was like, 'I'm mowing the greens today, are you down for opening tomorrow?' And I was like, 'Sure. It's perfect,'" Little said.

Right now the first nine holes are open and the second nine will be open soon.

"Opening this early is the locals mainly," Little said. "But that's perfect for them because most of them buy the season pass, so they get to start their year of golf a few weeks early."

With Williams' level four water restrictions currently in effect, golf course staff is prohibited from irrigating the fairways and roughs using potable water. However, with city staff using treated effluent water for the course, the restrictions do not apply.

City Manager Brandon Buchanan said currently the water plant produces about 300,000 to 400,000 gallons of treated effluent water per day, and in the summer that amount grows to about 600,000 to 700,000 gallons each day.

"The staff there still has to be cautious, because there is only a limited supply of the effluent available, especially when we're on restrictions we expect less of that to be available," Buchanan said.

Little was optimistic about the quality of the golf course during the city's water shortage.

"It's a great dumping ground for the reclaimed water," Little said. "The course is going to be in great shape."

As for other ways the golf course uses water, Little said staff would have to make do without.

"We're not going to wash the carts until the restrictions are up," Little said. "We're just going to blow them off and hand wipe them if we have to."

Other than that, Little said the golf course uses a relatively small amount of water for things like washing dishes for the restaurant and normal business operations.

During the winter some of the buildings at the golf course underwent renovations. The clubhouse features a remodeled bar area.

"It was a little bit dated, a little dark, a little crowded, a lot of unused space," Little said. "And this didn't match the golf course, because the golf course is top notch. So now the image of the bar kind of matches the golf course. So it just sets a different tone."

The bar area now also includes an additional television. The renovations to the bar area cost about $4,000 to $5,000.

The cart building at the golf course was also remodeled over the winter to become an event space. Little said the city has wanted to convert the space for years.

"It did host a few banquets, but it just didn't have the touch that a golf course banquet hall should have-cement walls, small windows, unfinished floor, semi-finished ceiling."

Now the building has finished walls, a finished ceiling, an enclosed kitchen, new glass doors and a finished patio. New carpeting will be installed soon. The renovations to the cart building cost about $10,000.

"Especially when you compare it to where the ceremonies are out on that golf course looking at Bill Williams Mountain, that's world class. That's as good as it gets," Little said. "You go from there to that building before, it was mediocre. Now they did a great job, it looks phenomenal."

"That's really important when you rely on tourists and people that play other courses that have a good idea of what other courses look like," he said.

Another personal change for Little this year is that he and his family have become permanent Williams residents.

"Last year at this time I was up alone and my family was still in the Valley," he said. "So we're full time now. So that's exciting for us."