Guest column: What is pre-diabetes? 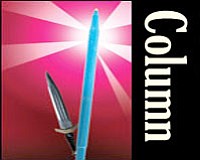 Pre-diabetes is a combination of medical disorders that increase the risk of developing cardiovascular disease and diabetes. It affects one in five people and the prevalence increases with age. Some studies estimate the prevalence in the U.S. as high as 25 percent of the population.

What is insulin resistance?

Insulin is a hormone that is responsible for transporting blood sugar into the cells. Insulin resistance is the resistance of the body's own cells to the hormone insulin. This leads to increased production of insulin by the pancreas and increased insulin and sugar in the blood.

Avoid refined carbohydrates and simple sugars such as candy, cookies, sodas and other sweets, which cause a spike in blood sugar.

Avoid trans-fatty acids in the form of hydrogenated oils.

Exercise regularly; walking after meals is effective for many people.

A weight loss of 5 to 10 percent can reduce the chances of developing diabetes.